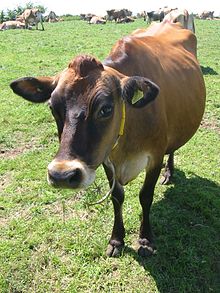 The Jersey Cattle is a breed of house cattle . It originally comes from the Channel Island of Jersey and was bred there for centuries without being influenced by other races. It is considered to be one of the oldest cattle breeds in the world. The cattle breed is valued worldwide for its high milk yield, its robustness and its gentle temperament.

In the UK, the breed is listed as Endangered on the UK Rare Breeds Survival Trust's watch list .

Jersey cattle are yellowish to light brown in color and are the smallest domestic domestic cattle. The cows weigh only 300–400 kg and are 120 cm high at the withers . The most important breed characteristic is the extremely high fat (approx. 5–6%) and protein (approx. 4.0%) content of the milk. On the other hand, the amount of milk at around 5,000 kg per animal and year is smaller than that of most milk breeds.

Jersey cattle presented in a competition

In the 1780s, cattle from the Channel Island of Jersey were allowed to be imported into England without customs duties. In contrast, high customs duties had to be paid for the import of cattle from continental Europe. Farmers in Normandy took advantage of this tax loophole by first landing cattle that they wanted to export to England in Jersey and grazing there for a few days before shipping them on to England. English cattle breeders resisted this import practice and under pressure from an angry English parliament, the Jersey administration agreed in 1789 to impose high customs duties on the import of cattle into Jersey. With this decision, cattle breeding in Jersey was cut off from crossbreeding with cattle from other areas - cattle ranchers in Jersey were dependent on developing their cattle only with cattle that were already available on the island. The existing livestock consisted of bloodlines from France, the Netherlands, Ayrshire and Friesland.

The development of the Jersey cattle was mainly influenced by John Le Couteur . The former army officer began a breeding program in 1830, in which mainly outstanding dairy cows were bred on Jersey. Above all cows were bred, which stood out for their high fat content. Le Couteur's breeding program proved to be very successful - the milk yield of Jersey cows increased so significantly that there was a very high demand for Jersey cattle in England. Within a few years, 800 cows were exported to England annually. Le Couteur noticed that English farmers were willing to pay more for yellowish to light brown colored cattle, although this correlated neither with the milk yield, the health or the gentleness of the respective cattle . Le Couteur and other Jersey breeders began to selectively select brownish cattle for further breeding. Within a few generations, Jersey cattle had a uniform coat color.

Significance for the development of cattle breeds

Since the end of the 19th century, animals of this breed have been exported to North America, Denmark and New Zealand in particular. There, larger stocks emerged from the imported animals than on the island of origin.

Due to the stricter barn dimensions in Swiss animal protection law , it may be an option for farmers not to have to convert the barn when they switch to Jersey cattle.