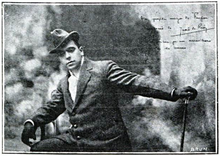 From 1896 he attended the Ginásio Nacional, today Colégio Pedro II . He published his first text in 1899 three years later. In 1903 he started as a journalist in the Gazeta de Notícias , where he worked until 1913. He later published his regular contributions as a book. In 1906 he made his debut with his first play "Chic Chic" , which he had written in collaboration with the journalist J. Brito; his play Clotilde was staged in 1907 at the Recreio Dramático theater . After a trip to Europe in 1908, where he visited Portugal, London and Paris, he brought out a children's book entitled "Era uma vez ..." (Once upon a time ...). In 1910 he was elected to Cadeira 26 of the Academia Brasileira de Letras .

Oscar Wilde's book Intentions was published in 1912 in a translation by him. During his third trip to Europe in 1913, his play “A Bela Madame Vargas” (The beautiful Madame Vargas) was successfully staged in Lisbon . In 1917 he wrote a chronicle entitled Praia Maravilhosa (Beautiful Beach) for the newspaper O Paiz , in which he described the beauties and events of the beach at Ipanema . He also founded the SBAT (Brazilian Society for Dramatists).

In 1918 do Rio traveled again to Europe to observe the armistice conference in Versailles after the First World War. His collection of short stories "A mulher e os espelhos" (The woman and the mirror) was published in 1919. In 1920 he founded the newspaper A Patria (The Fatherland), in which he defended the interests of the Portuguese colony in Rio de Janeiro. He died of a heart attack in 1921.

Michael Rössner writes about him in his book Literary Coffee Houses, Coffee House Literature : The strength of Joao do Rio's novels lies in his undecided decadent point of view, which with playful insight also reveals the dark side of the turn of the century Rio. In the notes it says: " The long neglected author is currently experiencing a new appreciation, as is not only proven by the interest in literary historical research, but also by the new editions of his works. "