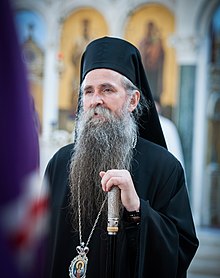 Joanikije Mićović studied theology and philosophy in Belgrade. Since 1992 he has headed the Serbian Orthodox Seminary in Cetinje . In May 1999 he was ordained bishop of Budimlje and Nikšić ( Northern Montenegro).

In 2016, Bishop Joanikije criticized the efforts of the Montenegrin government to join NATO. He spoke in Budimlje at a memorial event for the victims of the NATO bombing in 1999 and described this as an act of a “criminal armada”.

Bishop Joanikije was the closest collaborator of the Metropolitan Amfilohije . Both opposed a religious law planned by the then socialist government of Montenegro, according to which all religious communities had to prove that they owned their real estate before 1918. (In 1918, Montenegro had become part of the Kingdom of Serbs, Croats and Slovenes ; the autocephalous Montenegrin Orthodox Church was made subordinate to the unification of the Serbian Orthodox Church in 1920. Its autocephalous status was only granted in 1903 and 1905 by Prince Nikola I. was created in the course of his Greater Montenegro policy, without the population or the powerful clan heads at the time having been involved in this reorganization.) The law was passed by parliament at the end of 2019.

On May 12, 2020, Bishop Joanikije and other clergy from Nikšić were arrested for 72 hours because they (according to the allegation) had violated the ban on gatherings in connection with the COVID-19 pandemic . According to the clergy, a crowd had gathered for the annual procession in honor of St. Vasilije Ostroški , and the clergy led this spontaneously. On May 13, demonstrations against the imprisonment of clergy took place in Nikšić and Pljevlja ; this led to clashes with the police.

After the death of Metropolitan Amfilohije on October 30, 2020 caused by COVID-19, Bishop Joanikije administered the metropolis. He tested positive for COVID-19 after the funeral for Amfilohije himself, his eparchy announced on November 8, 2020.

On September 5, 2021, Bishop Joanikije was inaugurated in the Cetinje Monastery by the Patriarch Porfirije as the new Metropolitan of Montenegro and the coastal region. Police protection was necessary for this, as opponents had already erected barricades the day before with burning car tires and stones to prevent access to the inauguration. Hundreds of demonstrators gathered in downtown Cetinje and threw stones and bottles at police officers, who then used tear gas. Metropolitan and Patriarch had to be flown in by helicopter and left the city immediately afterwards. President Milo Đukanović called for the protests . The protesters saw the state independence of Montenegro violated because the Serbian Orthodox Church does not recognize the sovereignty of Montenegro and has now introduced its new metropolitan in the historic capital of Montenegro, where the Cetinje Monastery, the official seat of the Orthodox metropolitan, is located. The Montenegrin Orthodox Church - not recognized by the other Orthodox churches - sees itself as the successor to the Archdiocese of Cetinje, which was independent until 1920, so that Cetinje is also claimed by it as the seat of its metropolitan. Prime Minister Zdravko Krivokapić , who heads a coalition supported by the Serbian Orthodox Church during the election campaign, called the attacks by protesters on police officers a "terrorist act". At least 60 people were injured and 15 were arrested; According to the government, among those arrested was Veselin Veljović, a high-ranking advisor to Đukanović, who was formerly the country's police chief. Veljović is accused, among others, of the Montenegrin Deputy Prime Minister Dritan Abazović of staging the riots.