Metropolitan Region of Montenegro and the Coastal Country

The Orthodox Monastery of Cetinje , seat of the Metropolitan 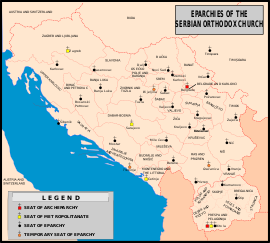 Eparchies of the Serbian Orthodox Church

In the Middle Ages and in the Ottoman Empire

An orthodox church for today's Montenegro was founded as the diocese ( eparchy ) of Zeta within the archdiocese of Serbia in 1219 by Sava of Serbia . In the Orthodox Church, regional churches consist of local churches, the eparchies, which in turn are independent within their area of ​​responsibility. In 1346, under the Serbian Emperor Stefan Dušan , the diocese of Zeta was raised to the rank of metropolitan, and the Serbian archbishopric became a patriarchate .

The seat of the diocese and later metropolis was initially the flower island in the Bay of Kotor . When the Serbian despotate was conquered by the Ottomans for the first time in 1439 , the metropolitan moved from Zeta to Bar , which was still under the rule of Đurađ Branković . A little later, the city should seek protection from Venice and place itself under its rule.

Parallel to the advance of the Ottomans into southeast Europe and the final conquest of Serbia in 1459, the local ruling family of the Crnojević was able to establish an independent rule around Cetinje , mostly in suzerainty with the Ottomans or Venice. This laid the foundation stone for what would later become Montenegro. After the conquest of Serbia, the independence of the Serbian patriarchate also expired and it was incorporated into the Archdiocese of Ohrid . However, the metropolitan area of ​​Zeta was able to maintain its autonomy, which was recognized by the Ecumenical Patriarch in Constantinople. In 1483 the Metropolitan of Zeta moved his seat from the Venetian Bar to Cetinje. Romilo I called himself Metropolitan of Montenegro and the coast next to that of Zeta for the first time in 1504. At that time the priest monk Makarije was also working with his printing press.

Montenegro itself was able to abandon Ottoman rule at the end of the 17th century under the leadership of the Metropolitans of Cetinje. The Ottoman rule was never strongly present in the barren mountains around Cetinje, and new political conditions enabled the de facto independence of Montenegro, which formally remained part of the Ottoman Empire. The Principality of Montenegro emerged under the Petrović-Njegoš , who, as metropolitans of Montenegro, directed both the religious and secular affairs of the country until the 19th century. In 1851 the theocracy was abolished in Montenegro and the country became a secular principality . The metropolitan area of ​​Cetinje remained the state church .

In 1878, at the Berlin Congress , Montenegro was also granted sovereignty under international law. In 1910 it was proclaimed a kingdom under Nikola I. The metropolis of Cetinje was raised to the rank of archbishopric and its autocephaly was confirmed by the Orthodox world church. In the Balkan Wars of 1912 and 1913, Montenegro expanded its national territory; the archbishopric of Cetinje received two new bishoprics. King Nikola I pursued a policy of unification of all Serbian countries, but at the same time wanted to preserve the independence of Montenegro. Although he was Greater Serbian, he refused to allow Belgrade to rule. In this sense, he claimed the Serbian Patriarchate for the Archdiocese of Cetinje, since the Eparchy of Peć was also under the jurisdiction of Cetinje from 1912 , which had been the seat of the Serbian Patriarchate until 1766.

On March 19, 1920, the Holy Synod of Constantinople decreed that the autocephalous churches of Serbia, Montenegro, Karlovac and two Dalmatian bishoprics should be merged into the unified Serbian Church . On September 28, 1920, the Metropolitan of Belgrade, Dimitrije Pavlović , was raised to the rank of first Patriarch of the Unified Serbian Church.

The Archdiocese of Cetinje was downgraded to the rank of metropolitan, but retained an important influence in the Serbian Orthodox Church. Two of the patriarchs of the Serbian Orthodox Church since 1920 came from Montenegro, Varnava Rosić (1930–1937) and Gavrilo Dožić (1937–1950). The late Archbishop Amfilohije Radović was deputy to the late Patriarch Pavle Stojčević .

After the end of communism and with the break-up of Yugoslavia in 1991, the number of believers in the Orthodox Church of Montenegro grew. While around 1990 there were around 10 active monasteries in the church with around 20 men and women who dedicated their worldly life to monastic existence, today there are 30 active monasteries with around 160 monks and nuns. The number of priests also increased from 20 around 1990 to 60 today. In the monastery of Cetinje, where the archbishop also resides, there is a theological faculty . The administration of the church was reorganized, an eparchy for Nikšić and a titular bishopric of Dioclitia were established, and the Metropolitan Amfilohije was restored to the previous title of Archbishop of Cetinje. In Podgorica , the new Metropolitan Cathedral was consecrated in 2013 with the Resurrection Cathedral.