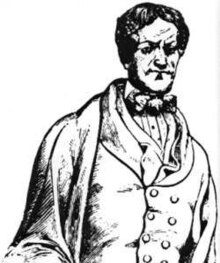 Model of one of J. Fitch's test boats, exhibited in the Technikmuseum Berlin

Since 1785, Fitch made various attempts to use the power of a steam engine to propel a ship . In 1786, near Philadelphia , he constructed and tested the first operational steamship , a ten-meter-long vehicle with a rear paddle wheel . As a public recognition, he received a monopoly right to build steamships in four US states. Because the steam engine was too weak, the speed was too low and the ship was difficult to steer, economically a failure. After another failure with a rudder drive, he succeeded in 1787 in the presence of Benjamin Franklin and George Washington on the Delaware with the screw-driven steamship Perseverance ( water displacement 9  tons / speed 6 km / h upstream). With this ship an almost regular passenger and freight traffic between Philadelphia and Trenton was operated around 1790, which the functionality was proven. The capacity was 30 people and the total distance traveled was more than 1000 kilometers. Since Fitch did not succeed in attracting further donors, including in Europe, he had to stop his work.