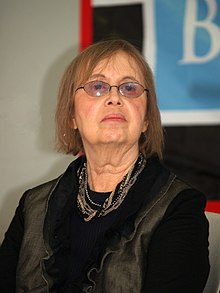 Joyce Johnson had gone to school with Elise Cowen , who was having an affair with the poet Allen Ginsberg , and Ginsberg hooked Joyce Johnson up with Kerouac in late 1956 by arranging a blind date for her and Jack Kerouac. The two were together until 1958.

"In principle, Kerouac's relationship with her was similar to that of his other girlfriends, but there were some differences: the relationship lasted longer, Johnson was more intellectual, and the intensity of her infatuation reflected the hunger of the next generation to celebrate On the Road ."

After the relationship ended, Joyce Johnson worked as an editor and wrote two novels. At the age of 47, she published her memoir Minor Characters , which gives an inside look at the Beat Generation from the perspective of a young woman . Above all, the book shows the personality of Jack Kerouac, who finds it difficult to cope with his fame, which has grown overnight. Minor Characters received the National Book Critics Circle Award in 1983 .