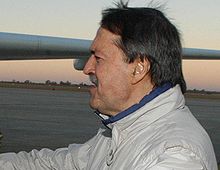 Juan Schiaretti (born June 19, 1949 in Córdoba ), known under the name El Gringo , is a politician of the Peronist Party from the province of Córdoba in Argentina . He is the current governor (gobernador) of this province.

Schiaretti studied at the Escuela Pública Nacional 95 in Córdoba. In 1997 he married Alejandra María Vigo. He had two children with her before that. Between 2007 and 2011 he was governor of Córdoba. In 2015 he was re-elected governor of his home province for the electoral alliance Unión por Córdoba , replacing his party colleague José Manuel de la Sota .