This article deals with youth work in the field of chess. For the magazine of the same name, see JugendSchach

The following important information is missing from this article or section:
In particular, details on youth leagues , training methods and the situation in other countries outside Germany are still missing - DaQuirin 21:33, Jan. 11, 2008 (CET) - Further information on school chess is missing. - Con structor 07:47, 13 December 2009 (CET)
Help Wikipedia by researching and pasting it . 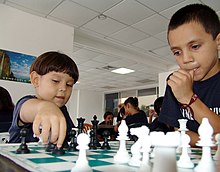 With Youth Chess is youth work in the area of Schachsports referred.

There are youth groups in most chess clubs and in many places chess groups in schools ("school chess"). The young people are divided into different age groups (U8 to U18). The junior age group forms a transition stage , which in chess includes the under 20s (U20). Most of the clubs in the German Chess Federation (DSB) have their own youth department with a youth leader who is mostly also a member of the board.

For centuries, the relationship between chess teachers and their (young) students was on an individual basis. With the strengthening of the sporting character of chess in the 20th century, the promotion of youth players was recognized as a task of organized sport. The first special youth tournament took place on the fringes of the Barmer Chess Congress in 1905. Presumably there were a few local youth tournaments before.

After the First World War , youth chess experienced a great boom, especially in the Soviet Union . Here is one of the reasons for the rise of the Russian chess school . In Germany, too, during the National Socialist era, the Greater German Chess Federation intensified the promotion of young players.

Since about 1950, youth players have been increasingly organized and introduced to championships in many countries. In the west of Germany, youth chess experienced an upward trend after the founding of the German Chess Youth in 1971. The initiative for this was primarily thanks to Christian Zickelbein , who had co-founded the Hamburg Youth Chess Association at the end of the 1950s.

In Germany, over 30,000 youth players under the age of 18 are organized in clubs. However, the number of children and young people who regularly play chess (e.g. in school chess groups) is much higher and is estimated by experts at around 150,000.

School chess outside of Germany

Chess has been a compulsory subject in primary schools in Armenia since 2011. In no other country does chess play a comparable role in schools.

Chess literature for the youth

In the chess literature , special textbooks for young people should be mentioned. There are also a few special magazines, including the magazine JugendSchach , which has been published in Germany since 1988 .