The boys' shaft jacket (short: Juja or Juscha, original name boys' shaft blouse ) is a slip jacket made of dark blue wool or heavy black cotton cloth ( charcoal ) that is worn by boys' shafts , scouts or other Bündische . The jacket has a wide collar at the back that can be turned into a hood. The neckline is closed with three buttonable bars.

Some scout associations have the badges of the clan or trips on the collar . Wearing the boys' jacket should show a connection with the traditions that were moved by youth . The jacket is also used for practical reasons, both as rain protection and as a warm jacket. It is slightly water-repellent, windproof and hard-wearing. 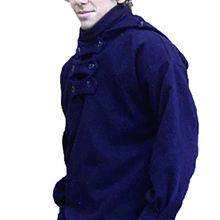 The boys' blouse, today mostly known as the boys' jacket , was designed in 1928 by Eberhard Koebel based on the navy blouses of the Red Black Sea Sailors and introduced into the German (autonomous) boys' union on November 1, 1929 (dj 1.11) as part of the federal clothing. This union has had a great influence on the Bündische Jugend through its creativity and its own style . Many songs come from dj.1.11, the Kohte , the yurt and the boys' blouse.

When Koebel wore his self-designed jacket in art school and was asked about it, he is said to have prophesied to his teacher that this jacket would one day be worn by many boys. Starting from dj.1.11, the blouse made of blue woolen cloth spread in broad circles of the Bündische Jugend. It was already in series production in 1928. The effect on the boys was so great that the Hitler Youth also introduced it in a significantly modified version for the young people. In order to distinguish itself from the dj.1.11, which was rejected as culturally Bolshevik , it was made of black fabric, the large collar was reduced in size and worn without the three crossbars. The name Jungschaftsjacket, introduced by the Hitler Youth, was adopted by many post-war associations with simultaneous recourse to the original cut and given the abbreviation Juja . In addition, there are mainly groups of young people who stick to the name young people blouse. Today's boys' shaft blouses / jackets are made either from blue wool, as they were originally, or from black cotton. Occasionally they are also available in other colors.

Traditionally, the blue wool blouse was pushed into the trousers; originally a shoulder strap was often worn over it. Today's groups usually wear them over pants or skirts.

Since the 1970s, numerous different versions of the boys 'shaft jacket have been offered, which differ from the original boys' shaft blouse, for example, through patch pockets, a different hood cut or changes in color and fabric.

In the federal German boy machinations In 1963, under the name of the city jacket is a further development of the boy shank blouse in gray and with a changed interface.