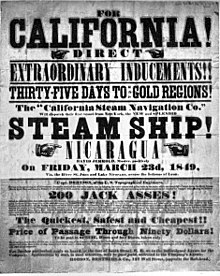 On January 24, 1848, James W. Marshall discovered the first gold nugget at Sutter's Mill , the construction site for a sawmill on the Neu-Helvetien ranch of the Swiss Johann August Sutter . As the ranch workers divulged the find despite Sutter's instructions, the first people from California soon rushed to the gold fields. The San Francisco press reported the gold discoveries in March 1848 and the New York Herald only on August 19. A gold rush developed.

The gold rush triggered the large flows of settlers after a speech given by President James K. Polk to Congress in December 1848. Polk used the gold finds to justify the 1846/47 American-Mexican War over California. This officially confirmed the gold discoveries in California.

As a result, several hundred thousand people moved to California in the next few years to seek their fortune. Between January 1848 and December 1849, San Francisco grew from 1,000 to 25,000 residents. The emigration to other parts of the country had profound effects on the local companies in some cases: a Californian newspaper had to stop its publication because it no longer had any workers, dozens of ships were moored in front of San Francisco because the sailors moved to the gold fields immediately upon arrival.

Traditional pan for panning for gold

Only a few gold diggers got really rich, but most didn't and those who did find gold often gambled it away or had to pay very high prices for simple goods. In 1849, for example, an egg cost one dollar, old newspapers could be sold for ten dollars apiece, and money was loaned out at five percent per week. Dealers and merchants were therefore among the winners of the gold rush, for example Levi Strauss .

Uncontrolled human immigration also caused major problems: from 1849 to 1851, San Francisco burned six times. The hygienic conditions were catastrophic, fleas and rats spread. In the winter of 1851 a cholera epidemic broke out.

At the start of the Spanish Mission, California's Native American population was estimated at around 310,000. At the end of the Mexican era, before the gold rush, only about 150,000 Indians lived in what would later become the state. By 1870 there were only 31,000 left. In contrast, there was the development of the inhabitants of European descent: In 1850 the US administration registered a total population of California of approx. 92,000, which rose to approx. 560,000 inhabitants by 1870. Over 60 percent of the Indians had died of diseases brought by prospectors. Countless Indians have been driven from their land and massacred. On scalps of Indians premiums were exposed children of Indians like slaves sold. The extraction of gold released over 7,000 tons of mercury , which poisoned rivers and lakes.

Due to its wealth and because of its rapidly growing population, California became the 31st state in the Union (USA) on September 9, 1850.

From 1854 gold mining was carried out industrially, which meant that the time of private gold diggers was over.

Neither Sutter nor Marshall could profit from the gold: Marshall died completely destitute, Sutter lost most of his vast possessions, which once comprised large parts of California.