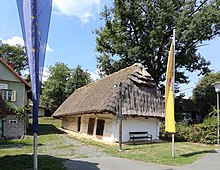 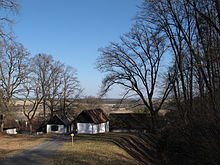 The Heiligenbrunn cellar district in Heiligenbrunn in Burgenland extends across the vineyards Stifterberg, Zeinerberg and Zeinergraben on a ridge west of the southern Burgenland village of Heiligenbrunn and is part of the "Nature Park in the Wine Idyll". In total, the cellar district consists of around 150 press houses and wine cellars, which are not actually cellars, but mostly wooden block buildings on a rammed earth floor. About 130 of the press houses and wine cellars are at the next and the two kilometers long freight route Kellerviertel . Another 15 on and next to the Zeinerberg supply route .

The Kellerviertel goods route begins at a bend in the L401 road above the town and north along the Stifterberg. The wine cellar and granary, built in the 18th and 19th centuries, stand loosely between fruit trees. The low wooden block buildings show clay-smeared, whitewashed walls under hunched gable roofs, some with thatched roofing. There are ancient mortised and bolted oak doors, some with carvings and year names. The cellars are mostly two-roomed, with wooden beamed ceilings at the front, seating area and wine barrels, and at the back with an open roof and wine presses. The storage tanks are smaller, mostly square, with a tent roof.

Since 1963, extensive work has been carried out on the preservation of the cellar district, which has been under landscape protection since 1969 . Around 110 of the press houses and wine cellars are under monument protection ( list entries ). The ensemble is a protected cultural asset under the Hague Convention .