The title of this article is ambiguous. For the US political scientist, see Donald P. Kommers . 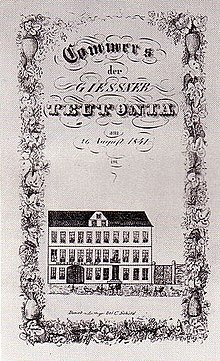 Usual seating arrangements on a Festkommers

A Kommers ( Latin commercium "traffic") is a highly official celebration, which is mainly held at student associations .

The Kommers is an evening drink held for a special occasion in a festive setting and, especially for students, the festive and representative form of the student pub . Kommerse typically take place on the occasion of foundation festivals, city or university anniversaries . In contrast to the pub, which is divided into the office and the unofficial, the Kommers is divided into the high office and the office or is officially celebrated in one piece. The Kommers has a much more serious character than the pub. Mostly only songs that correspond to the occasion are sung on the commercial board, classical drinking songs are not recorded.

The celebratory speech, which is given by a high-ranking personality, plays an important role. This speech used to be called the principle speech . In many student associations, it is common for the members of the board to also take the floor. In the Wingolfsbund, for example, the senior is obliged to hold a Wingolf drum, the Fuxmajor holds a university or fatherland drum , the pub attendant a Philistine drum . Before the Kommers, the serious celebration takes place at Wingolfsverbindungen .

In order to facilitate the singing of the student songs - collected in so-called Kommers books - a small band is often used as support, alternatively a pianist (student beer organ ). In the case of particularly important commers, for example on the occasion of a “big” foundation festival, a “celebratory father ” often takes place afterwards .

At the end of the 18th century, Kommers was still an expression for the casual evening drinking, eating and smoking of the students among their friends in public pubs. In the course of the 19th century, the Kommers, like the pub, was increasingly formalized as an event organized by student associations .

In honor of Mayor Arnold

For especially festive Kommersen overact next to the host compound is usually also befriended connections in the Bureau.

The Baltic Philistines Association organized every year with Estonian, Latvian and Polish students compounds common to the whole Baltic peoples Kommersbuch serving as unifying fixed alternately in Estonia , Latvia , Poland will be held and Germany.

At the funeral , the celebration takes place in honor of a deceased person.

The opening event of a shooting festival ("Festkommers") is also referred to as Kommers . Kommerse are also known at anniversary events of gymnastics clubs , music clubs and volunteer fire brigades as well as at graduation ceremonies.