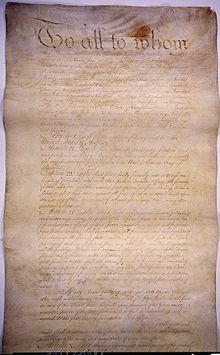 The Articles of Confederation

The articles of confederation (English: Articles of Confederation and Perpetual Union ) were the first constitutional basis of the United States and forerunner of the American Constitution of 1787. Its regulations were based essentially on the principle of the national sovereignty . After the Continental Congress passed them on November 15, 1777, they were in force from 1781 to 1789 after their three-year ratification .

Independence Movement in the Thirteen Colonies

The thirteen American colonies (this term does not include the British, also North American colonies of Québec , Nova Scotia and Prince Edward Island ) had been in conflict with the British Crown, which was in charge of rule over this area, since 1763. In particular, disagreements on an economic level caused by a new tax policy by the British government had led to increasing alienation between the colonies and the mother country. As the conflict situation intensified, the American War of Independence broke out in 1775 . In the second year of the war, 1776, the formal separation from the motherland followed with the adoption of the declaration of independence .

Administrative conditions and need for a constitution

The political administration of the confederation was meanwhile carried out by the continental congress called in 1774, which at that time was the only intercolonial institution. Otherwise there was a lack of governmental organizational structures that would have formed a higher-level element or defined the character of a state or federation of states. In 1776, the first individual states, including New Hampshire and Virginia , began to draw up separate constitutions that should replace and replace the previously applicable royal laws. A common constitution regulating the relationship between the individual state and the central power did not yet exist; However, the emergence of such a document was necessary, on the one hand, to overcome the existing political void and, on the other hand, to determine the scope of action of the Continental Congress as a supra-colonial institution and the position of the individual states. For this purpose, a committee was convened on June 12, 1776, whose task it should be to draft a constitution effective for the first time as a whole. Each of the Thirteen Colonies sent a delegate for this purpose.

The international legal regulations of the articles of confederation were based on the principle of the complete sovereignty of the individual states, i.e. the 13 former British colonies . Thus they established an American confederation , so to speak , which, however, had some structural shortcomings and quickly failed because of them.

From the beginning of the Confederation, its legislature, the Continental Congress , was not allowed to raise its own taxes. Contributions from the member states were supposed to contribute to the functioning of the confederation organs, but most member states did not comply with this convention. For this reason it was not possible for the confederation of states to guarantee its members military protection against the increasing interventions of the European powers.

The Philadelphia Convention was convened to remedy this situation . Actually, it should initially only advise on the possibility of improving the state organization and find a formulation of the articles in order to reassure the individual states who feared for their power. In the end, however, it submitted a completely new draft constitution, which, unlike the articles of confederation, called for a strong federal government as the executive body. This should take over the competences of the individual states, especially in questions of foreign policy, foreign trade and national defense.

In retrospect, the Articles of Confederation, viewed historically, nevertheless established the Union of North American states that would from now on be perpetual.