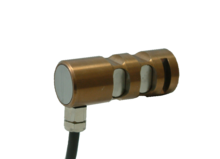 A force measuring bolt is a connecting bolt between force-transmitting machine elements which, in addition to its function as a bolt, enables the transverse forces occurring in it to be measured at the same time . This measurement is carried out using strain gauges or magnetic coils , for example .

Force pins are also known under the following terms:

The measuring bolts are used in particular in hydraulics on lifting equipment such as cranes , lifts and cable cars .

Load pins must be attached so that their orientation is fixed. The axial displacement and the rotation must be fixed. Proper restraint is essential to get accurate results. An axle holder according to DIN15058 is used for this.

This installation variant is referred to as a bolt retainer with axle holder groove and axle holder plate. Other variants are the following: