The slow aircraft LF1 Wren was a single-seat, propeller-driven STOL - light aircraft , the early 1940s by students under the direction of Hermann Winter at the Technical University of Braunschweig at the Institute of Aircraft developed and built.

Winter played a key role in the development of the Fieseler Storch in the 1930s . After leaving the Fieseler company, he took over a chair at the Institute for Aircraft Construction at the TU Braunschweig in August 1938. In the course of the training of its students, a low-speed aircraft was designed and built there in 1939/40. Teaching and research were in the foreground here, a special purpose was not specified.

Because of the limited financial resources, the aircraft should have the smallest possible dimensions and use an economical engine. The slow flight characteristics should at least correspond to those of the stork. Construction of the machine (code D-YBAR) in the institute's workshops began in mid-1940 and was completed at the end of 1940. The first flight took place in December 1940, on November 11, 1942 the aircraft was lost during flight tests in an accident.

Since the military was interested in a slow aircraft for submarine observation, as an anti-tank weapon and for training purposes, a second prototype was built by 1943, which was confiscated by the British after the end of the Second World War . After a short military and several years of private use, this aircraft is now in the branch of the Deutsches Museum in Schleissheim .

Two other aircraft of this type were built in the 1950s, one was destroyed in an accident in 1957. The pilot Oskar-Heinrich Bär , a well-known German fighter pilot of the Second World War, was killed.

On June 10, 1955, the "Wren" was the first motorized aircraft built in Germany after the war to receive a D-EBAR license. The type certificate was issued on October 5, 1955. 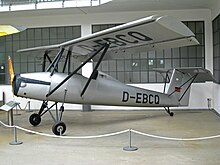 The 2nd prototype D-EBCQ in the Schleissheim aircraft yard