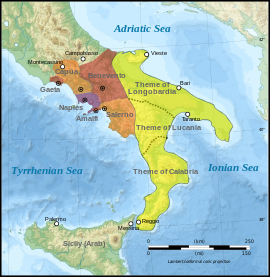 Longobardia ( Greek  Λογγοβαρδία , also Λογγιβαρδία, Longibardia or Λαγουβαρδία, Lagoubardia , Old Norse Lankparþalant ) was a Byzantine term for the areas in Italy ruled by the Longobards . In the 9th / 10th In the 19th century it was also the name of the subject Longobardia , which was located in south-eastern Italy.

In his chronicle, Theophanes distinguishes between the "Great Longobardia" (Greek: Μεγάλη Λογγοβαρδία; Latin: Longobardia major ), which means the kingdom of the Longobards in northern Italy, and the "Little Longobardia" (Latin: Longoboleto minor ), which means the Duchy of Sp , the Principality of Salerno , the Principality of Capua , the Byzantine possessions, and the city-states of Naples , Gaeta and Amalfi under Byzantine suzerainty.

Longobardia was also the name of a subject that encompassed present-day Apulia and parts of Basilicata , the capital of which was Bari . Its origin is unclear. The topic could originally a Abtailung ( Turma ) of the subject Cephallenia have been, which was set 876 after the reconquest Baris by the Byzantines, from where reconquered from these larger parts of southern Italy, which they had lost in earlier centuries to the Lombards and Arabs. In the late 9th century it was apparently administered in personal union with other themes of the Byzantine Empire: the first known strategos of Longobardia from the year 891, Symbatikios, was also the strategos of the theme of Macedonia , Thrace and Kephallenia. The topic only had its own strategos from 911 onwards. In 938 and 956 it was probably combined with the topic of Calabria , which became a fixed arrangement at the latest in 965, when both topics were combined to form the Katepanat Italy based in Bari.

V
Subjects of the Byzantine Empire
after De Thematibus by Constantine VII. Porphyrogennetos (around 950)