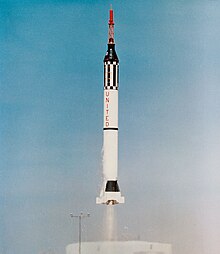 Start of Mercury-Redstone 1A

The Mercury-Redstone-1A mission took place on December 19, 1960 and formed the replacement mission for the failed Mercury-Redstone 1 mission . The same capsule (serial number 2) was used, but the launch vehicle was exchanged for the second attempt. The mission lasted 15 minutes and 45 seconds and was successful. The capsule was recovered by helicopters 15 minutes after it dived into the Atlantic. It is now located in the Exploration Center at NASA Ames Research Center at Moffett Federal Airfield, California.

The apex of the orbit parabola was 210 kilometers high, the distance covered was 375 km. The capsule was started with Redstone MRLV-3.