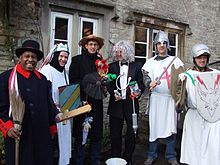 The component -schanz goes back to the Middle High German word schanz (e) "Fall der Würfel, Würfelspiel", more generally also "Spiel, Wagnis", which in turn is borrowed from the old French ch (e) ance , "Fall", "lucky chance" , "happy case of the dice", and is still up in the phrase zuschanzen something someone "provide someone with an advantage of something good help" lives on.

The origin of the first component Mum (men) - on the other hand, is not entirely certain and is traced back to the Middle High German verb mummen or mumman , which was used in the 14th to 16th centuries to denote a game of chance and has been documented in this meaning since 1351 . On the other hand, it also comes from the word mumme “mask, disguised figure”, which has been documented in this meaning since 1475 and still lives on today in the prefixed forms of mumbling “masking, disguising” and muming up “ wrapping in warm clothes” and in turn from old French momer (documented since 1263) “dress up, mask” or momon “mask” and then in the last instance from Spanish and Portuguese momo “grimace, buffoon, mocking gesture”, or from an onomatopoeic mummer “incomprehensible speaking”.

The composition mumschanz or momschanz has been documented in German since the 16th century by expressions like a mumm (en) schanz, throw, bring , both as a general term for gambling with dice, as well as in connection with the custom, Visiting foreign households disguised with masks during Christian Lent or especially during the actual Mardi Gras and offering a game of dice there, which was widespread in Germany and France and in England also had late medieval forerunners.

If mumschanz was not a term for “dice game by mums, disguised persons” from the beginning due to its origin from mumme “mask, disguised person” and was only subsequently generalized to the meaning “dice game”, it is therefore a general term for “ Dice game ", which was only transferred to this custom through the inclusion in the custom and secondary association with mumme " mask, disguised person ". In the further development up to the 18th century, the reference to gambling and dice games was largely lost, so that the word has since remained common only in the meaning of "masquerade, mask game" (mostly with a derogatory connotation). In 1825, Goethe wrote a poem with the title Der Cölner Mummenschanz .