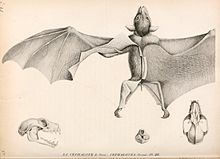 The dobsonia are a generic group within the family of flying foxes (Pteropodidae). The group includes two genera ( Dobsonia with around 15 species; and Aproteles with one species, Aproteles bulmerae ).

Description and way of life

They owe their name to the fact that their sparsely hairy flight skins do not start from the flanks, as is the case with most other types of flying fox, but directly from the backbone, which gives the impression of a bare back. Further characteristics are the pointed ears and the lack of the claw on the second fingers (which is present in most fruit bats).

The fur of these animals is gray-brown in color, they reach a head-trunk length of 10 to 24 centimeters and a weight of 70 to 600 grams. The tail length is 19 to 39 mm. Dobsonia minor is the smallest, Dobsonia magna and Aproteles bulmerae are the largest species.

They are forest dwellers, but unlike many other species of flying fox, they seem to prefer to sleep in caves, crevices or hollow trees rather than in trees. Some species such as D. magna form large colonies comprising several thousand animals, but solitary animals are also found again and again. At night they go looking for food, they feed mainly on fruits.

Little is known about reproduction, pregnant or lactating females have been observed in almost every month, and it is believed that they usually give birth to a single young once or twice a year. The young are sexually mature after two years .

The distribution area of ​​the bare-back bats includes eastern Indonesia (from Sulawesi and Bali to the east), New Guinea , the Solomon Islands and northeastern Australia . One species, Dobsonia chapmani , lives in the Philippines , it was thought to be extinct before it was rediscovered on Cebu in 2001 and on Negros in 2003.

The destruction of the habitat represents the main threat to these animals. Dobsonia chapmani , which occurs on the Philippines islands of Negros and Cebu , is threatened with extinction due to extensive deforestation and the extraction of guano in their caves. Aproteles bulmerae , which occurs only sporadically in New Guinea, is considered to be acutely threatened, three other species are considered threatened or endangered according to the IUCN .

The systematics of the fruit bats is largely based on the phylogenetic study of Kate E. Jones et al. a .: A Phylogenetic Supertree of Bats . The authors do not use a rank in the classical sense for the taxa . The designation of this group as a tribe with the ending -ini is therefore chosen arbitrarily, sometimes this taxon is also found as Dobsoniina.