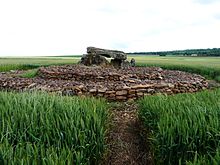 The necropolis of Monpalais also ( French Les dolmens de Taizé - German called  "the dolmen of Taizé" ) is located in the Val de Thouet, west of the D17 southeast of Thouars in the Deux-Sèvres department in France . The necropolis originally consisted of nine dolmens and a tumulus . The megalithic complexes have no registered proper names, they have numbers between E 129 and E 170 and were excavated by Charles Hébras in the 1950s and 1960s (numbers 1 and 4 are better restored). In France, dolmen is the generic term for megalithic structures of all kinds (see: French nomenclature ).

The restored dolmen à couloir (dolmen with a corridor) is located in a small, round cairn . The chamber measures approximately 3.0 x 2.0 m. The entrance, which is half closed by a stone, is to the east. The preserved capstone lies over the west of the chamber.

Only 50 m to the west is a collapsed dolmen, consisting of a capstone, an end stone and two side stones. The chamber may have been about 1.5 × 1 m. Around these stones is a rectangular stone packing measuring approximately 7.0 × 5.0 m, which consists of the red stones of the formerly round hill.

Dolmen 3 is a small, incomplete dolmen, about 150 m west of dolmen 4. A capstone measuring about 3.0 × 2.0 m lies on two tilted side stones and an end stone. The access points to the north, which is extremely rare. The chamber stones are located in a cairn with a diameter of about 7.0 m, which also fills the chamber.

A few hundred meters north of dolmen 1 is the large dolmen 4, which is a V-shaped dolmen, which is located in a curb-enclosed oval hill of about 15.0 × 10.0 m. The head-high chamber is about 8.0 m long. In the east, where the access is located, it is about 2.0 m wide and at the western end about 4.0 m wide.

Two protruding capstones cover the main part of the chamber, while the entrance area is not covered. In the chamber there is a stone that has no architectural function, a feature of facilities in the region, but which is seldom found in other megalithic areas. The round hill on the access side only extends to the front edge of the bearing stones, whether this corresponds to the original state is open.

To the west of dolmen 1-4, closer to the village of Praillon, is the restored dolmen 5. A capstone measuring around 2.0 × 2.0 m lies on two side plates and an end stone. The access is in the east, where dolmens 3 and 4 are within sight. It lies in a pile of small red stones that are about 5 feet in diameter.

The remains of a chamber measuring about 2.0 × 1.0 m without a capstone lie in a small, round pile of stones about 7.0 m in diameter. The entrance points to the northeast. The dolmen has two long, heavily damaged side stones and an end stone.