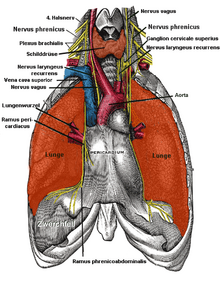 Chest position of the person with the phrenic nerve

The phrenic nerve (diaphragmatic nerve ) is a nerve that arises from the neck area of ​​the spinal cord and, among other things, innervates the diaphragm .

In humans, the nerve arises from the 3rd to 5th neck segment of the spinal cord and is a branch of the cervical plexus , in one fifth of individuals there are additional accessory phrenics ( Nervi phrenici accessorii ) from the lower neck segments. The phrenic nerve runs in front of the anterior scalene muscle and behind the deep cervical fascia as well as the sternocleidomastoid muscle , and then, accompanied by the subclavian artery and vein , enters the upper thoracic aperture. There it is initially in front of the pleural dome and then between the mediastinal pleuraand the pericardium to get to the diaphragm. It is accompanied by the pericardiacophrenic artery . On its way it gives off branches to the pericardium, the mediastinal pleura and in the abdomen to the peritoneum of the liver , pancreas and the anterior abdominal wall. If the pericardium is opened, the nerve can be damaged. In a pleurisy (pleurisy) can cause irritation of the nerve and thus to a hiccup ( hiccough come).

Fluoroscopic examination of the diaphragm with paresis of the phrenic nerve on the left side. In the so-called "sniff test", the patient is asked to breathe in jerkily through the nose with his mouth closed (to "sniff"). The healthy side of the diaphragm (here on the right - i.e. on the left in the picture) moves downwards, the paralyzed side (here on the left) upwards (paradoxical diaphragm movement). In this way, other, non-paretic causes of an elevated diaphragm can be differentiated.

Due to its early exit from the vertebral canal , humans still have the possibility of breathing through the diaphragm even with paraplegia in the area of ​​the rear cervical spine . Basically, with a deformation up to the third cervical vertebra, massive disturbances of the function of the lungs and heart are to be expected with a high probability, with damage to the fourth cervical vertebra probable. From the fifth cervical vertebra, life-threatening paralysis symptoms are no longer common, but spinal cord injury symptoms such as a dysfunction of the extremities and others are common.

After gas-containing laparoscopy , irritation of the phrenic nerve often occurs in patients, which manifests itself in chest or shoulder pain. The gas used puts pressure on the diaphragm, causing nerve irritation. After the residual gas has completely escaped after the laparoscopy, the symptoms disappear.

For diagnostic purposes, the phrenic nerve can also be stimulated using magnetic induction. Although this is much gentler than electrical impulses, there is no product on the market that uses this method.