Operation Deep Freeze marks a series of operations by the US Navy in Antarctica , beginning in the 1955/56 season. 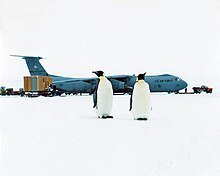 Deep Freeze I took place in 1955 and 1956. The aim of this action was the establishment of the stations Little America V in Kainan Bay on the Ross Ice Shelf and McMurdo on McMurdo Sound on Ross Island and the associated airfield ( William Air Operations Facility ).

A year later, Operation Deep Freeze II would set up four new American IGY stations: the Amundsen-Scott on the South Pole (set up by airplanes), Byrd in Marie-Byrd Land , Wilkes on the Knox Coast and Ellsworth on the Filchner-Ronne Ice Shelf .

With Deep Freeze IV (1958/1959) further crossings should be supported. The Little America, Wilkes and Ellsworth stations were abandoned. Since 1960, the following Deep Freeze operations have been named after the year in which they take place.