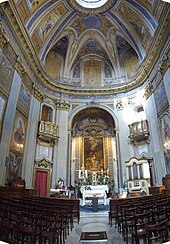 The Oratorio del Santissimo Sacramento is a Catholic church in the Italian capital, Rome .

It is located in Rione Trevi , at 11 Piazza Poli . Via del Tritone runs north and Via del Mortaro runs south .

The church was built between 1576 and 1596 for the brotherhood Ss.Sacramento. In 1681, Carlo Rainaldi rebuilt it in the Baroque style . In the 18th century, Domenico Gregorini carried out another renovation in collaboration with De Dominicis, Marchionni and Valadier. Luigi Martinori redesigned the interior of the building in 1875.

The east-facing facade is characterized by convex and concave surfaces. The portal is flanked by two pilasters , which are crowned by a broken tympanum and each with a marble statue. The statues were created by Paolo Benaglia in the 18th century and represent faith and hope. Directly above the portal there are two angel figures. Above the portal there is a large arched window framed by two columns and pilasters.

Inside the church, the main altar has an altarpiece by Francesco Trevisani depicting the Holy Family .