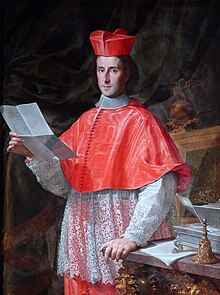 He was the son of the architect Antonio Trevisani, who gave him his first lessons. Trevisani studied painting with Antonio Zanchi in Venice . In 1678 he went to Rome , where he was initially promoted by Cardinal Pietro Ottoboni (1667–1740), later by Cardinal Chigi, who passed it to Pope Clement XI. recommended. In Rome, his painting was heavily influenced by the classical style of Carlo Maratta , and Trevisani was a leader in Roman painting with his own painting school after Maratta's death in 1713. Guido Reni , Paolo Veronese and Pietro da Cortona are also mentioned.

His main works include the frescoes in San Silvestro in Capite in Rome, which he executed with Giuseppe Chiari and Ludovico Gimignani in 1695/96. For Clemens XI. he painted one of the prophets (Baruch) in the Lateran Basilica and worked on the decoration of the dome of Urbino Cathedral . Trevisani also painted for secular clients, including the Duke of Modena (for whom he copied works by Antonio da Correggio and Parmigianino ) and at the courts of Braunschweig , Madrid , Munich , Stockholm and Vienna . Other works are The Death of Saint Joseph in Sant Ignazio in Rome, the main altar of the Palace of Mafra in Portugal and scenes from the life of Saint Luzia of Narni in the Church of Narni . In addition to religious motifs, he also painted mythological and historical subjects.

In 1712 he became a member of the Accademia dell 'Arcadia . In 1719 he created one of his main works, the stigmatization of St. Francis for the church Santissime Stimmate di San Francesco , two other paintings there are (uncertainly) assigned to him. A significant late work is the miracle of St. Anthony in the Venetian Church of San Rocco .

His brother Angelo Trevisani was a well-known painter in Venice, which is why Francesco was sometimes called Roman Trevisani .