San Silvestro in Capite ( Latin Sancti Silvestri in Capite ) is a church in Rome and titular church of the Roman Catholic Church . It was built in the 8th century on the remains of an ancient building; its forecourt contains a large number of ancient and medieval spoils . It is the national church of English Catholics and is administered by Pallottines .

The church is in the III. Roman Rione Colonna , at the Piazza San Silvestro in Capite about 200 meters northeast of the Piazza Colonna .

The first church was built in the 8th century under Pope Stephan III. Erected on the ruins of a Roman temple, this was dedicated to the god Sol . A Romanesque building followed, the campanile dates from this time . Finally, Domenico de Rossi gave the church its present form from 1690.

Campanile seen from the courtyard

The facade, which is actually part of the gatehouse leading to the church , was executed by Domenico de Rossi after 1700. On the left and right of the portal , the display walls are structured by corner pilasters with Ionic capitals. The marble relief above the entrance is based on the "imprint" of Jesus Christ on the handkerchief of St. Veronica . The actual portal leading to the church is simple, three arcade arches open over square pillars decorated with pilasters , above is a simple floor - which continues the pilaster structure of the portico - with windows and a simple gable. The campanile is multi-story with double windows typical of the Romanesque.

The special feature of the inner courtyard are the numerous walled-in spoilers . The historical spectrum ranges from antiquity to the 18th century and includes a wide variety of topics and depictions. 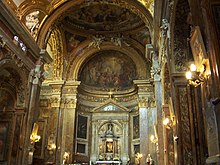 The interior of the church

The high altar was created by Carlo Rainaldi . It houses the tabernacle , which is framed by angels and cherubins . Above the tabernacle there is a figure of John the Baptist , the gable shows the veil of Veronica .

The church owes its nickname in Capite to a valuable relic : it is said to be the head of John the Baptist, which is kept here in a Gothic reelquiar. The chapel is the first on the left.

In the crypt of the church remains of the previous buildings from different centuries are visible.

The two pillars under the organ gallery date from early Christian times.

The former monastery of San Silvestro in Capite , which is directly adjacent to the church in the east , was also founded by Pope Stephan III. founded. As in the case of the church, renovations were carried out at the end of the 16th century and then around 1700. In the 12th century, Benedictines took over the monastery, followed by Poor Clares in 1285 and Pallottines in 1855 , who still look after the church today. The monastery was converted into the main building of the Italian Post Office in 1877 . In 2003 the Italian government acquired the building and had it extensively renovated. Since 2007, it has served, together with neighboring buildings in Via della Mercede, as a branch of the Presidium of the Council of Ministers , whose headquarters are in the nearby Palazzo Chigi . The archives of the Presidency of the Council of Ministers and part of the modern Biblioteca Chigiana were housed in the pillared hall of the former main post office . Part of the building is still used by the post office, the other rooms are used for administrative purposes.