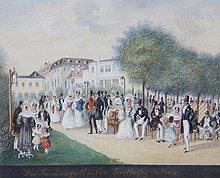 The Paradeisgartl in the first half of the 19th century.

The Paradeisgartl (also Paradeisgartel) on the Löwelbastei was a public green area in the area of ​​the Vienna city walls .

A distinction is made between older and younger Paradeisgartl. The older Paradeisgartl was built in 1755–60 and designed by the court gardener Adrian van Steckhoven . A popular coffee house was built here in 1784. In 1817, after the bastion was blown up (1809) and a new curtain wall was built (1811–16), the younger Paradeisgartl, which from 1823 became the Volksgarten. There was the Corti coffee house, which became a meeting place for the aristocracy and the upper class. The curved ramp behind him led up to the Hornwerkskurtine. In 1872 the curtain wall to the east was demolished and the new Burgtheater was built in its place . The rest was integrated into the Volksgarten . Incidentally, there were several other gardens in Vienna that were named Paradeisgartl.

The Paradeisgartel is the scene of a well-known song by Ralph Benatzky , which was interpreted by Maria von Schmedes and Michael Heltau , among others ( Fireworks in the Paradeisgartel today ).