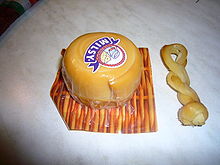 Parenica [ ˈparɛɲiʦa ] is a Slovak brewed cheese . As Slovenská parenica , it has been awarded the EU community symbol “ Protected Geographical Indication ” (PGI / CZO) since 2007 .

The cheese is semi-solid, does not ripen and is steamed. Most of the time the cheese is smoked ; However, if you make your own, you can also find unsmoked varieties. The special character of Parenica is mainly due to the manufacturing process.

The fat content is at least 50 percent in the dry matter. Steaming at 60 to 70 ° C causes partial pasteurization.

Parenica comes from the Zvolen and Brezno area .

The name Parenica (pronounced: parenietza ) means “the brewed” in Slovak.

In Hungary the cheese is known as "Parenyica".

Its production dates back to the 18th century when the cheese was made in the kitchens of sheep farmers for their own use. Over time, its production spread almost over the entire area of ​​Slovakia. In the 19th century, cheese came onto the market not only in what is now Slovakia, but also in Vienna and other foreign cities. Since the 1950s, the cheese has only been produced in the mountainous region of Slovakia in locations from 200 meters.

The first written records date from the 19th century. The milk expert Otakar Laxa described in his book Syrařství, I. vydanie, rok 1908 (Cheese Making, 1st Edition, 1908) its origin, production and its unusual appearance.

In the Austrian food book Codex Alimentarius Austriacus from 1917, it says in the cheese chapter on page 180 that Parenica is a steamed, pulled cheese that is drawn into strips and threads from hot water and then rolled up and smoked. The origin lies in Upper Hungary, so in Slovakia, and the Slovak name is loud Parenica.

The freshly milked sheep's milk or the mixture of sheep and cow's milk is heated to 29 to 32 ° C until it becomes acidic. Rennet is added, which allows the milk to curdle. The curd is stirred and then cut into pieces. When the break has settled, lumps are formed from this mass. After draining and setting, the cheese lumps are placed on wooden or stainless steel supports, where acidification takes place at a temperature of 20 to 23 ° C, which lasts about 24 hours. Then the cheese lumps are placed in a wooden bucket and spread on the inside of the bucket with a small wooden shovel until a fine cheese mass is formed.

The cheese mass produced in this way is repeatedly pulled apart and folded and finally a strip is pulled out of the mass, which is spread with the edge of the hand on a wooden board to a length of 4 to 6 meters, about 6 cm wide and 2 to 3 mm thick. Then this cheese strip is placed in a prepared cold, saturated brine. At the same time, a thin cheese cord is made, which is later used to wrap and tie the rolled up cheese.

After briefly soaking in the brine, the cheese ribbon is removed and rolled up, typically from both sides in different directions, so that an "S" is created. Finally, the cheese is tied with the cheese threads or a chain and dried. Once dry, it is ready to eat or placed in a smokehouse, where it is smoked over hardwood for two hours.

Parenica has a fine consistency and tastes slightly salty, like mild sheep's milk cheese; threads form when pulling apart. The cheese has a characteristic smell of sheep's milk and - if smoked - of smoke. After smoking, its surface is yellow to brown, the inside white to buttery yellow.

In its unsmoked version, the cheese is ready to eat. It's cream-colored, soft, almost unsalted, and typically squeaks on your teeth. The consistency is elastic and fibrous.

Typical is the special type of winding, in which an S-shape is created from two connected and oppositely wound cheese ribbons.

Industrially produced Parenica cheese sold in the EU has a dry matter of at least 53 percent and at least 50 percent fat in the dry matter, table salt a maximum of 3 percent. It contains natural microorganisms from milk from the strains Lactobacillus , Enterococcus , Lactococcus and Streptococcus and must not contain any pathogenic microorganisms such as Listeria monocytogenes or Salmonella .

In the Official Journal of the European Union of October 24, 2007, the main components of the product specification of "Slovenská parenica" are described as follows:

“'Slovenská parenica' is a steamed, lightly smoked cheese that consists of two rolls of cheese strips with a diameter of 6 to 8 cm and a height of 5 to 8 cm connected to one another in the shape of an 'S'. The rolls are held together by a cheese thread or a chain. Before being rolled up, the cheese strip has a thickness of 2 to 3 mm, a width of 5 to 8 cm and a length of 4 to 6 m.
'Slovenská parenica' has a fine taste and smell of sheep's milk and smoke. Its characteristic feature is the pronounced fibrous structure of casein.
Freshly milked, raw sheep's milk from grazing sheep of the races Valaška , Zošlachtená valaška , Cigája or Východofrízska or a mixture of fresh, unprocessed raw sheep's milk and fresh, raw, unprocessed cow's milk is used as raw material, with a sheep's milk content of at least 50%.
Single packs with a content of 450 to 500 g are offered on the market. The cheese is packed in transparent food film or cellophane between two ovals made of thicker wood veneer. "