The pillar house was a half-timbered house built in Hildesheim in 1623 . It was destroyed with all other half-timbered houses around Andreasplatz in the bombing of Hildesheim on March 22, 1945 . Together with the Everted Sugar Loaf , which is located in the immediate vicinity, it was one of the city's attractions and was a popular postcard motif.

On the site of the destroyed pillar house, a modern building was erected in the 1950s, the shape and volume of which corresponds to the pillar house. The framework was only hinted at. A half-timbered porch of the destroyed building, on the other hand, was replaced by a Bauhaus- style jewelry pavilion.

As part of the reconstruction of the inverted Sugar Loaf in 2009/2010, the demolition of this pavilion was hotly debated. So far, the advocates of the demolition have not been able to prevail, as both the pavilion and the successor building of the pillar house are listed.

Nevertheless, there are increasing voices to demolish the pavilion and to put the half-timbered facade of the pillar house in front of the building behind. 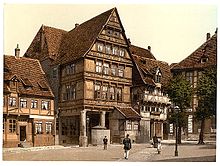 Pillar house and everted Sugar Loaf between 1890 and 1900

Such a reconstruction could include other parts of Andreasplatz and even all of Hildesheim in the long term. This technique was already used in the 1980s. B. in the case of the Wedekindhaus , which was also destroyed in the war, on the Hildesheim market square and was well received by the public. This form of urban design is criticized by monument conservationists.