This article describes the architect. For the French general, see Pierre Kœnig . 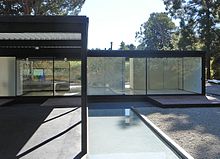 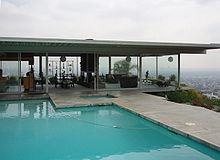 Pierre Koenig (born October 17, 1925 in San Francisco , † April 4, 2004 in Los Angeles ) was an American architect . He is one of the fathers of Californian modernism and became known in the post-war years for his steel and glass constructions.

Koenig received his architecture diploma in 1952 from the University of Southern California , where he studied with Raphael Soriano , among others . In 1953 Koenig married Merry Thompson, the following year his son Randall Francis was born. After five years of marriage, he divorced his first wife. His second wife, Gail Carson, married Koenig in 1960, and his second son, Jean Pierre, was born a year later. In 1964 Koenig became an assistant professor at the architecture faculty at the University of Southern California, Los Angeles, where he was appointed associate professor four years later. In 1971 Koenig became a member of the College of Fellows of the American Institute of Architects (AIA). The divorce from Gaile Carson followed in 1975. In 1985 he married Gloria Kaufman, who brought two sons into the marriage. Koenig was appointed full professor at the University of Southern California's Faculty of Architecture in 1996.

"[Pierre Koenig is the] key figure in a generation that helped make Los Angeles one of the great laboratories of 20th century architecture."

Koenig mainly practiced on the west coast and was best known for his designs for the steel structure houses Case Study Houses No. 21 (1956-1958) and 22 (1960). Both constructions No. 21 (also called Bailey House ) and No. 22 (the Steel House ) were built on land previously considered to be undeveloped.

“You have to understand that there was a joyful spirit of optimism back then. The war was over, everyone was extremely idealistic and wanted to solve the housing shortage problem. All dealt with mass production, building systems and solving social grievances. It was an exciting time in which everything was tried out. "

1989: Culture Prize of the City of Los Angeles

1998: Distinguished Alumni of the University of Southern California Faculty of Architecture

1999: Distinguished Professor of Architecture from the University of Southern California

2000: Honorary Member of the Royal Institute of British Architects

2000: Gold Medal for Lifetime Achievement from the Tau Sigma Delta Society of Architects and Landscape Architects

2001: Received the 25 Year Award from the AIA, California Council