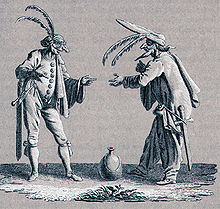 Princess Brambilla is a literary capriccio written in Berlin in 1820 by ETA Hoffmann after eight copper engravings by Jacques Callot . The ironic story tells of the moderately talented actors Giglio and Giacinta, who are initially in love with the curious Princess Brambilla and Prince Cornelio, respectively. At the end of the turbulent story, Giglio and Giacinta realize that they are in love with each other. One of the characters in the story, the painter Reinhold, sums up the turbulent eddy vividly: “It seems to me that the colorful masquerade of great, fairytale-like fun is stirring up all sorts of characters in ever faster and faster circles so that they can no longer be confused to recognize, no longer able to distinguish. "

Princess Brambilla was staged as a play for children by Elmar Ottenthal and premiered on February 5, 1985 at the Theater for Children in Hamburg-Altona . Later there was a recording for the NDR .