The King's Bride is an art fairy tale by ETA Hoffmann , which appeared in the eighth section of the fourth volume as the last text in the collection The Serapion Brothers in 1821 by G. Reimer in Berlin. 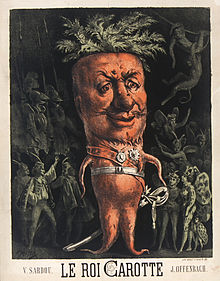 Actually, Miss Ännchen - more precisely: Anna von Zabelthau - has a steady bridegroom; the student Amandus von Nebelstern. Amandus, the only son of a neighboring landowner, is a miserable poet. When Mr. Baron Porphyrio of Ockerodastes aka Daucus Carota the first alias Corduan pointed - that's a "little gnome king" - spoken for, the land lady would still be rather Gnome Queen and gives the students their marching orders. Just in time for the gnome wedding, Ännchen's father - the brilliant Kabbalist Dapsul von Zabelthau - determined what a "deceitful vegetable genom of the lowest sex" Corduanspitz is. King Daucus Carota the First can be relegated to the vegetable patch with a racket and Ännchen gets a well-grown man - her student Amandus.

The narrator Vinzenz ( David Ferdinand Koreff ) drew the story from the chronicle of the small village of Dapsulheim. The half-orphan Ännchen cultivates her vegetable patches with devotion on her father's poor property. During such work, the girl takes off a wedding ring from a carrot , puts on the piece of jewelry and temporarily feels a sharp pain in her ring finger. It is strange - the beet slips back into the ground on its own. The beautiful ring cannot be pulled off. That stabbing pain then resurrected prevents that.

The father asks the stars astrologically in his “astronomical tower” . He confides in his daughter that he has been loved by the shy, shy Sylphide Nehahilah (ETA Hoffmann explains: “ Syrian , so much as a pointed nose”) for twelve years . Mr. Papa approves of Ännchen's choice of partner Amandus and plans a double wedding with the daughter. However - this is how the father, who is well versed in dealing with elementals, relativizes - the daughter is missing out on a good match. Judging by the precious ring, a rich, distinguished, finely educated gnome had given her his favor. Ännchen wants to be freed from the magic ring. An attempt by the father in this regard with the mystical file fails.

The gnome Baron Porphyrio - small, yellow and ugly - appears and regards Ännchen as his bride. The baron consists mainly of a head. The limbs are underdeveloped. He doesn't walk like that, but hops back and forth, falls over and flings himself up again. In his entourage there are elegant vegetables with Pan Kapustowicz , Herr von Schwarzrettig , Signor di Broccoli and Monsieur de Roccambolle at the head. The carrot guard follows along with lettuce princes, bean princesses, cucumber farmers, melon princes, cabbage ministers, fennelage and the onion and beet generality. The “chosen bride” sends her Amandus a cry for help in his university town: the student should duel with the rival.

The baron understated. In reality, he is the vegetable king Daucus Carota the first. Ännchen has always had a soft spot for vegetables. Now the royal bride revises her request for help in another letter - marked with "future queen". That's wrong again. The father finds out the truth about the king (see above under "Summary"). A treacherous, malicious and cruel nome king should not get the Ännchen. Dapsul von Zabelthau with his magic arts and the resolute daughter Anna fight unsuccessfully against the royal vegetables. But Amandus steps in. He would like to be court poet of the vegetable king. Daucus Carota demands a test of poetic skills on the spot. Amandus accompanies himself on the guitar during his lecture. The king cannot stand the singing. When the nasty little carrot guy Corduanspitz has to retreat into his soil - Ännchen's vegetable patch - the bride can literally take off the ring at the last moment and slip the carrot over it. Practically by magic, the landlady Ännchen - in between turned yellow and unsightly shrunk - is "pretty as before, well-proportioned and so white"; in a word, Anna becomes desirable again for her Amandus. Anna digs up her bed with the usual verve and accidentally hits Amandus with a spade on the head. From the second magic stroke, the bridegroom finally becomes sensible: He throws all his "confused verbiage" into the fire and is cured of his "poetitis". The couple are getting married. Vincent did not find anything in the Dapsulheimer Chronik about the marriage of Dapsul von Zabelthaus with the Sylphide Nehahilah.

The first edition in the Serapion Brothers