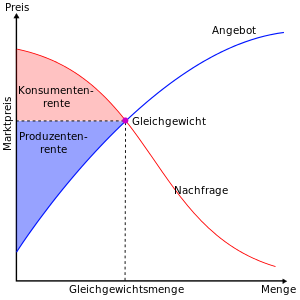 Consumer surplus and producer surplus in the market diagram .

The producer surplus (Engl. Producer surplus ) is by Alfred Marshall , the difference from the equilibrium price that the producer due to the market conditions actually receives (market price) and the price he at least needs to stay profitable (1890) ( reservation price ). The producer rent is an economic rent that is opposed to the consumer rent . Together these are the essential building blocks for determining economic welfare .

The producer surplus is closely related to profit , but not to be equated with it. Distinction:

Since there are no fixed costs in the long term, in this case one can speak of a producer surplus as the difference between sales and variable costs.

The term producer rent is also misleading because the extra profits do not constitute economic rent in common parlance. Rather, they are the reward for the fact that the companies concerned produce more cheaply than the frontier supplier .

A special MP3 player is bought and sold at a price of € 100 (market price), but supplier A could have offered it for € 80 (due to its lower production costs). He “saved” € 20 compared to the general sales price (producer's pension).

The producer surplus is interesting under conditions of restricted competition :