If the functions of a protocol layer are subdivided into individual processes that run independently of one another and one after the other, they can be divided into sub-layers.

The figure shows the sub-layers of Ethernet as an example of a protocol stack . The OSI model is shown as a reference . While Ethernet only has functions that are assigned to layer 1 (physical layer) and layer 2 (data link layer) in the OSI model, on closer inspection these two layers are broken down into 7 sub-layers in the Ethernet protocol stack.

The example also shows two interfaces between the protocol layers: the Media Dependent Interface MDI and the Media Independent Interface MII. The sub-layers of Ethernet were divided up in such a way that the layers above the MII are independent of the transmission medium, i.e. regardless of whether Ethernet is transmitted, for example, via a coaxial cable or an optical fiber . This made it possible to manufacture ICs with a standardized MII interface that are suitable for different transmission media and can therefore be produced cost-effectively in larger numbers. 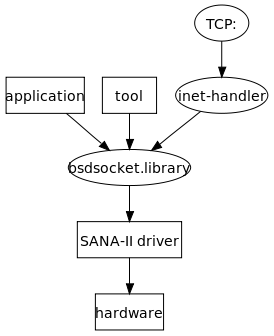