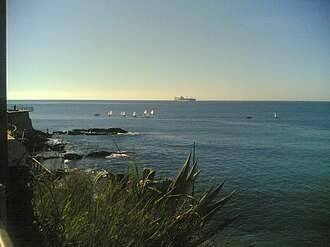 Quarto dei Mille , or simply Quarto , is a residential area in the Italian port city of Genoa . The district is located in the east of the city between the districts of Sturla and Quinto al Mare and has direct access to the Gulf of Genoa.

Until 1861 the quarter, at that time still an independent municipality, was known as Quarto al Mare , but was then renamed Quarto dei Mille (German: Quarto of the thousand ) in honor of the train of the thousand .

In 1926 Quarto lost its independence and, according to the plans of the fascists, was incorporated into the Ligurian capital by a Greater Genoa .

Today the district belongs to the Munizip IX Levante and has a population of 8288. Until 1997 Quarto was part of the district of Sturla-Quarto .