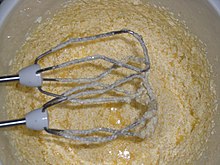 Mixing batter (often, but not technically, also called batter ) is a stirred, sometimes whipped mass for making cakes and other fine baked goods , which mainly contains eggs , fat , sugar , milk or water , flour and starch . Compared to the biscuit and Viennese mass , it has a higher fat content and is therefore harder to whip. The pastries easing is partly purely physically by the introduced in the preparation of air, depending on the type pastries but also with chemical support of leavening agent (especially baking soda ) or exclusively chemically.

Pancakes differ greatly in the proportions of the ingredients. The higher the fat content, the “heavier” the mass and the resulting baked goods. If the proportion of wheat starch is high compared to the amount of flour (50% to 75% of the total amount of flour and starch), the crumb will be fine-pored, loose, tender and somewhat dry, as desired for sand cakes . On the other hand, if you reduce the starch content or use only flour, as is often the case with marble cakes , the crumb becomes coarse-pored and firm. Instead of wheat starch you can also use other types such as potato or corn starch. Also, whole-wheat flour is good for batters, the pastry then gets a kernigere texture.

Sand mass is a batter which, according to the German food book, contains at least 20 parts butter or other fats and at least 20 parts whole eggs per 100 parts of total mass. A particularly heavy mass of sand is the “old German mass”, which contains eggs, sugar, fat and flour / starch in equal parts (“Gleichschwerkuchen”).

It is characteristic of pancakes that the ingredients are combined and emulsified by stirring. In addition, by stirring and (depending on the recipe) also by whipping the total mass or part of the ingredients, air is worked into the mass to a greater or lesser extent and a physical loosening of the baked goods is made possible. The introduction of air reduces the density of the mass, which professional bakers determine by taking a defined volume of the mass and weighing it. Typical liter weights for batter mixes are in the range of 600–900 g / l. Sufficiently ventilated masses can be baked completely without raising agents; with other baked goods such as Americans , on the other hand, a poorly ventilated mass and the use of leavening agents are characteristic. In the bakery, these preparation steps are usually carried out with a mixer and beater, in the household with a hand mixer or with a food processor . There is no generally applicable processing method for the ingredients - the work steps vary depending on the recipe.

Baked goods made from batter

A muffin batter as it rises in the oven

Easter lamb made from batter in baking tin

Sponge cakes can be baked in box, Gugelhupf and other forms, as well as sheet cakes . The fine baked goods made from batter include:

The composition for Baumkuchen is also a batter with a high proportion of eggs and fat.