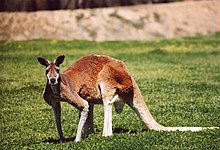 The red giant kangaroo ( Macropus rufus ) is a species of kangaroo . It is the largest representative of the kangaroos and the largest living marsupial .

Outstanding features of the red giant kangaroos are the muscular hind legs and the powerful tail, which can carry the weight of the body on its own. It becomes almost as long as the body and serves as a support and balance during long jumps. The front legs are very short in comparison. The muzzle is elongated, the ears long. The fur is short and rough, in males it is reddish-brown, in the majority of females it is blue-gray. There are specimens in which it is the other way round.

These animals inhabit arid and semi-arid areas across Australia with the exception of the coasts and the southwest. They live in different habitats such as semi-deserts, steppes and scrublands. However, they rarely stay in completely treeless areas because they need trees as cover and protection from the hot sun.

Red kangaroos do not have a distinctive social structure. Sometimes they form loose, small groups of around ten animals. These consist of several females with their offspring and one male. During the mating season, other males sometimes try to fight with this one for the females. These fights consist of bites, punching with the front paws and kicks with the strong hind legs. Red giant kangaroos have no territorial behavior; in places with plenty of food, up to 1500 animals can sometimes gather. In general, however, there are no permanent connections between adult animals of different sexes.

The animals spend around six to ten hours a day eating, mainly at dusk, at night or in the early morning. In the heat of the day they rest in the shade of the trees.

Like many other kangaroos, giant red kangaroos have two modes of locomotion. When foraging for food, they move on all fours, rely on their short front legs and graze the ground. At high speed they only hop with their hind legs in the familiar way, the tail is used for balance. The animals can jump up to 9 m far and 3 m high and reach a speed of over 60 km / h.

Red kangaroos are herbivores. The main part of their diet is grass, they also eat leaves and tree bark. A multi-part stomach and special microorganisms in the digestive tract are used to process the difficult to digest food, as is the case with ruminants . Rumination can also be observed. They need very little water and can survive for long periods without drinking. 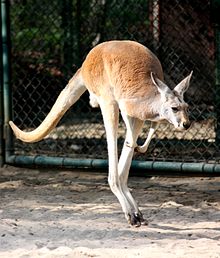 These animals, like all kangaroos, have a well-developed pouch with four teats. Mating can take place all year round, but depends on the food supply. After a gestation period of around 33 days, usually one, rarely two young animals are born. Newborn kangaroos are only 2.5 cm long and 0.8 g in weight. The tongue and forelimbs are already present, otherwise newborns are not very developed compared to placental animals. They crawl from the birth canal into the pouch and cling to a teat.

The red giant kangaroo has a delayed birth. Two days after birth, the female mates again, the embryo develops up to a size of 85 cells and then rests (when the previous young is suckled in the pouch). As soon as the youngster is seven months old (or earlier if the youngster dies) the embryo continues to grow, and a day after the youngster finally leaves the pouch, a new one is born. After the birth, the cycle begins again. This has the advantage that female kangaroos can have three children at once: one as an embryo, one in the pouch and one outside the pouch. In extreme drought, however, females become sterile and no longer reproduce.

The young animals let go of the teat for the first time after 70 days, after 150 days the head looks out of the bag, after 190 days they come out temporarily and after around 240 days they leave the bag completely. However, young animals are suckled up to an age of one year - they simply put their heads in their mother's pouch. The young are sexually mature after 15 to 24 months.

In captivity, giant kangaroos can live up to 24 years, but in the wild they hardly get older than ten or twelve years.

Adult giant kangaroos hardly have any natural predators. If they are attacked, they lean on their tails and defend themselves with kicks on their strong hind legs. Sick specimens and young animals sometimes fall victim to the dingo .

Red giant kangaroos have coped better with the arrival of Europeans in Australia than many smaller species of kangaroo, they have largely retained their settlement area. In some regions they are persecuted as food competitors of the sheep and cattle herds. They are also hunted for their meat , and the processing of their skin into leather goods is on the decline.

Estimates of the total are eight to ten million animals. Their number is stable, but observations are still necessary to keep the food competition from sheep and rabbits within limits.

In Europe the species is kept in 82 zoos, 12 of them in Germany.