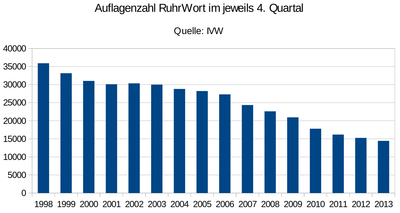 The RuhrWort was the church newspaper of the Catholic diocese of Essen . It was founded in 1959 and appeared weekly in the Rhenish format , most recently with a print run of over 14,000 copies.

The founding editor was the Viennese journalist Otto Kaspar (1920–2010). Father Johannes Leppich recommended him to the Essen bishop Franz Hengsbach . In 1960 the annual average was around 145,000 copies. Otto Kaspar headed the RuhrWort until 1987.

The RuhrWort was published in the Diocese of Essen with the five additional regional editions of Duisburg, Oberhausen / Mülheim, Gelsenkirchen, Bochum / Ennepe-Ruhr-Kreis / Märkischer Kreis and Bottrop / Gladbeck in the Essener Kirchenzeitung Verlagsgesellschaft mbH , a member publisher of the Catholic Media Association . Advertisements were distributed via KONPRESS-Medien eG , a marketing association of 37 Catholic and Protestant newspapers.

The RuhrWort provided information from a Christian-Catholic perspective on current issues from the Church, society and politics. One focus was the reporting on life and events in the universal church as well as in the local church, regionally with news from the parishes of the diocese of Essen. The usual newspaper columns such as radio and television tips, help in life and features supplemented the content.

The RuhrWort was delivered by messengers who also collected the subscription fee. Delivery by the post office was also possible.

After the RuhrWort was discontinued , people associated with the previous church newspaper founded the Neue Ruhr-Wort as a weekly newspaper independent of the diocese of Essen.

Instead of a church newspaper, the diocese of Essen has been sending the free, six times a year magazine BENE to all Catholic households in the diocese since the beginning of 2014; BENE is an artificial word made up of the first letters BE for diocese of Essen and the Italian word bene (good).