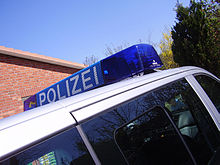 The all-round sound combination , RTK for short , is a brand of the Lippstadt-based company Hella for a structural unit made up of one or more (usually blue) rotating beacons and a special acoustic signal system for the use of access and special rights . They are also available without a secondary horn and with beacons of different colors. The name "Rundumtonkombination" and the abbreviation "RTK" are also used colloquially for similar devices from other manufacturers.

This combination is available in a wide variety of designs. The most common is the built-in roof structure perpendicular to the direction of travel.

Various modules were / will be installed as light sources:

Pictures of special signal systems can be seen on some private pages of collectors: