Sankin kōtai ( Japanese 参 勤 交代 , dt. About: "changing waiting") describes a political control instrument of the Shogunate in the Edo period . The Sankin kōtai obliged the daimyo to temporarily attend the Shogun's court in the capital Edo . In 1635 , the Tozama daimyo were first committed, and in 1642 the Fudai daimyo . This law remained in force until 1862. 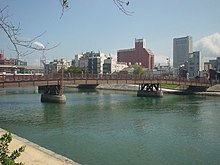 Tokiwabashi in Kitakyushu on the way to Edo

The Japanese government of the Edo period sought effective control of the country. Japan at that time was divided into Han , ruled by daimyo . Central power lay with the Shogun and his administration called Bakufu (tent government). Since Japan's great civil war in the time of the Warring Lands ( Sengoku-jidai ) was essentially a war between powerful daimyo, the shogunate wanted to avoid excessive autonomy for the provincial princes and effectively control their actions.

For this purpose the daimyō as well as the Kōtai-Yoriai - Hatamoto were obliged to appear regularly (the time modalities fluctuated) in the capital Edo and to give an account. They were also required to maintain adequate residences in Edo and to let their families live there as hostages all year round.

The shogunate thus gained influence over the daimyo in two ways. First, the direct one, which resulted from the obligations to appear in person and to place hostages. On the other hand, the double housekeeping in Edo and in the native Han as well as the travel forced by the Sankin kōtai led to a considerable financial burden on the daimyo. Overall, the daimyo were so effectively controlled and forced to cooperate with the central authority. Officially, the Sankin kōtai was viewed as the fulfillment of the feudal obligation . The feudal daimyo appeared with his samurai at his liege lord, the shogun, to pay his respects.

The journeys of the daimyo ( 大名 行列 , daimyō gyōretsu ) accompanied by their samurai followed the first highways of Japan, the kaidō . On the way to Edo, special accommodations ( 本 陣 , honjin ) were maintained for the traveling princes and their entourage.

A long-term consequence of the Sankin kōtai was an urbanization of life as the daimyō families brought considerable purchasing power to Edo and were succeeded by merchants and artisans.

Wall screen by Kyosai Kiyomitsu 1847 with the attendance of the daimyō and their entourage from the Han Okayama (right panel 1), Fukuoka (panel 4), Kurume (panel 5), Tottori (panel 6), Satsuma , Izumo (both panel 7) and Sendai (left panel 8) in Edo Castle .