The Klybeck Castle is a former moated castle in the area of ​​the Kleinbasler Quartier Klybeck in the canton of Basel-Stadt in north-western Switzerland . Until it was demolished in 1955, the castle stood on the corner of Kleinhüningerstrasse and Klybeckstrasse.

The meadow estuary in the background Klybeck Castle, engraving by Matthäus Merian the Elder. Ä., 1618/24 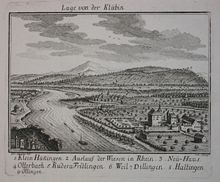 Klybeck Castle from the south, in the foreground the Klybeck pond with mill wheels, Emanuel Büchel, 1754

In a document of the St. Alban Monastery from 1283, Klybeck ( by Kluben im grien ) is first mentioned as a place name in connection with a donation of goods and lands. In the 14th century there is already a mill with a mill stream on Klybeck. In 1361 the Mülin Klüben and in 1396 also the Klübentych were mentioned. A sawmill has also been built in Klybeck since 1410 at the latest.

In the 15th century the estate was owned by the knight Hans Reich and was equipped with gardens and a moat. In 1492 the estate was first mentioned as Klybeck Castle. During this time there is also a process that has been handed down between the owner of Schloss Klybeck at the time, the Abbess of Säckingen, Elisabeth von Falkenstein, and the Röttler Landvogt Junker Thuringian Empire. The governor had blocked the flow of water from the meadow and thus drained the pond surrounding the castle. The legal dispute was only resolved after ten years.

The estate belonging to the castle consisted of several farm buildings, besides the mill and the saw, paper mills and a wine trot are also documented for Klybeck . The Weintrotte was not available in Klybeck for nothing: In the 14th and 15th centuries, vines were grown in the Klybeck vineyard.

Essential for the success of the mill trade was the Klybeckteich, a former branch of the Wiese river that was converted into a mill stream and commercial canal. It was probably used as early as the 14th century and existed until 1896, when the canton of Basel-Stadt took over the Klybeckteich and had it filled in during construction projects such as the tram depot and freight station.

Gut and Schloss Klybeck came into the hands of many owners over the centuries. The St. Blasien Abbey , the Säckingen monastery, Basel councilors, knights and citizens, doctors, bailiffs (from 1738 bailiff of Kleinhüningen), landlords and paper manufacturers. In the 19th century, the originally rural surroundings of the castle estate changed rapidly, and large industrial complexes ( Ciba ) and residential barracks were built in the immediate vicinity . As a bourgeois country estate, agricultural property and as a mill location, Klybeck had had its day. From 1903 it was owned by the Basler Baugesellschaft, which converted the building into an apartment building. In 1955, Klybeck Castle was demolished to make way for a modern residential building.