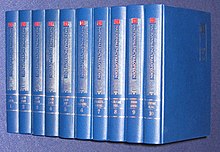 Volumes 1–10 of the National Cyclopedin

The Swedish National Encyclopedia ( Swedish Nationalencyklopedin. Ett uppslagsverk på vetenskaplig grund utarbetat på initiativ av Statens Kulturråd ; NE) is an encyclopedic reference work published on the initiative of the Swedish State Cultural Council ( Statens Kulturråd ). The first volume was published in 1989 and the entire work was completed with 20 volumes by 1996. The Bra Böcker AB publishing house in Höganäs was entrusted with the publication of the National Encyclopedia ( ISBN 91-7024-619-X ). Today NE offers various knowledge products, including an online encyclopedia, and is aimed primarily at organizations and institutions.

From 1995 to 1996 a three-volume dictionary ( Nationalencyklopedins ordbok , NEOB) was added.

On the sidelines of the Frankfurt Book Fair , it was announced in October 2015 that the publisher of the Swedish National Encyclopedia ( NE Nationalencyklopedin AB ) in Malmö had taken over the rights to the Brockhaus brand . The German subsidiary NE GmbH in Munich has been developing and marketing the Brockhaus knowledge service since then . The target group for the pure online service are “schools, universities, libraries, authorities, media, companies” for “relevant, verified knowledge”. However, the editorial team continues with the Bertelsmann subsidiary Inmediaone . Since June 2018 it has also been possible for private individuals to subscribe to paid access.