The oath of the Horatians
Jacques-Louis David (1784) 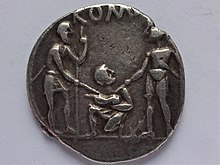 earliest Roman coin (denarius, 137 BC) with an oath scene

An oath is a solemn promise made using formulas of assurance.

The subject of the oath can be the promise of future action or behavior, for example to solve a task, to carry out an act (e.g. oath of revenge ) or to keep agreements ( oath of loyalty ). But the truthfulness of a statement, such as a testimony in court, can also be evoked.

In literature, a sworn oath is often the triggering motive that sends heroes on a difficult or long journey. In Old Norse saga literature , it is not uncommon for an oath traditionally expected at a great Yule Festival to oblige those who have taken it - often in competition with others - to undertake daring ventures.

The teaching of Jesus quoted in the Gospel of Matthew ( Mt 5,33-37  EU ) “You have heard that it was said to the ancients: You should not swear perjury and: You should keep what you swore to the Lord. But I say to you: Do not swear at all, neither by heaven, for it is God's throne, nor by the earth, for it is the stool for his feet, nor by Jerusalem, for it is the city of the great king. Nor should you swear by your head; 'Cause you can't make a single hair white or black Your yes is a yes, your no is a no; everything else comes from evil ”is interpreted by some Christians, such as the Anabaptist groups, in such a way that taking an oath, even in court, is forbidden. The United States and Austria, for example, instead accept the handshake as an affirmation from these communities.

Differentiation from the oath

In contrast to the taking of the oath , which is an oath that takes place within the written norms - be it in an association , a professional association , an authority or in court - the oath is a more general concept that is also used in everyday interpersonal relationships. While children and adolescents usually cannot be sworn in, they are free to reinforce any promises by swearing it to the adult or also underage counterpart.

In this case, the function of the oath is to increase confidence in the fulfillment of the promise. From the point of view of game theory , there are interesting considerations. As long as trust in the reliability of the oath is maintained, the swearing person benefits from the permission, acceptance or consent, while the other benefits from the resulting reduced control effort.

However, the swearing person can abuse the trust and thereby derive a particularly high benefit at least once. As a result, however, due to the serious breach of trust, he can typically no longer resort to the instrument of the oath, often also against other people who become aware of the incident. This high social price means that the oath usually fulfills its function, even if there are no legal consequences.

A complementary aspect concerns the taking of an oath. If a person is regularly asked or even put under pressure to reinforce a promise with an oath, then the possibilities of the person who swears are restricted to make a non-binding promise or a white lie , which in turn has repercussions on the character of the respective oath itself.

Numerous oath formulas ("on my honor", "so help me God" and much more) were sometimes combined with oath gestures. In the Middle Ages, this included reaching for your own beard and, for women, your braid. The parallel stretching of the three oath fingers is still practiced : thumb, index and middle finger.