A scoop condenser or scoop cooler is a heat exchanger installed on board ships , which is used on steam ships to condense the residual amount of steam and on motor ships to transfer the heat contained in the coolant to the seawater. 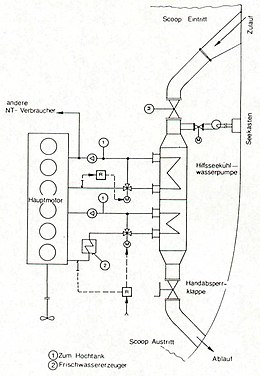 Depending on the propulsion system of the ships, 25 to 60% of the energy supplied with the fuel is released into the sea water. This is served by the main sea cooling water pump, which became superfluous on steam ships and later also on motor ships due to scoop condensers and scoop coolers.

Ships are powered by diesel engines , steam turbines or, less often, gas turbines. The efficiency of the propulsion systems in large ships is around 25 - 50% in nominal terms. The rest is lost as power loss with the flue gas via the chimney and cooling media. This means at the propeller come apart from frictional losses in the bearings of the propeller shaft and the gland, about 25 - 50% of the supplied fuel with the main engine power to.

Diesel engines are common today for ship propulsion, as they have the highest degree of efficiency at 40 - 50%. 25 - 30% each is discharged with the exhaust gas and the cooling water.

In the case of steam turbine systems, the degree of efficiency is around 30 - 40%, depending on the amount of steam superheating and reheating . That is the reason why steam propulsion systems are rarely used in merchant shipping. Here, the exhaust gas loss in the steam boiler is 5 - 10% and the loss in the condenser transferred to the cooling water is around 55 - 60%, if radiation losses are neglected. Since the performance of the electrically driven main sea cooling water pump was very high due to the large cooling water volume flow, the scoop condenser was developed.

Arrangement of the scoop capacitor 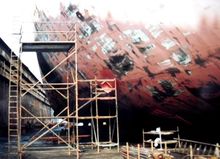 Ship in the dock, view of the coop

This is a tubular heat exchanger , the tubes of which are flown through by the seawater in one direction without being deflected. To reduce flow losses, the pipe diameters are chosen not to be too small. The wet steam from the low-pressure turbine flows around the outside of the pipes and is condensed on the cold pipe outer walls. The condensate is collected in the condensate tank and returns to the boiler via the condensate pump, feed water tank, feed water pump and preheater.

The scoop cooler is arranged on the seawater side in such a way that the seawater flows through it as the ship moves. Arrangements are selected both parallel and transverse to the ship's longitudinal axis. The inflow and outflow of the scoop cooler has a major influence, because spoon-shaped constructions are attached to the outer skin at the inlet and outlet of the pipe. Hence the name Scoop (Scoop = spoon, ladle). On the inlet side of the seawater, a "spoon" behind the pipe ensures overpressure, on the outlet side a "spoon" in front of the pipe ensures negative pressure. The travel speed and the pressure difference caused by the "spoons" ensure that the scoop cooler flows through.

In addition to the elimination of the cooling water pump with corresponding electrical energy savings, another advantage is that the cooling water volume flow is adapted to the amount of steam to be condensed via the travel speed. The disadvantage of the scoop cooler is the higher price and the larger space requirement. In port operation, the condenser is supplied by the auxiliary sea cooling water pump, which, however, consumes little electrical power due to the small amount of steam and the low flow resistance.

Use in motor ships 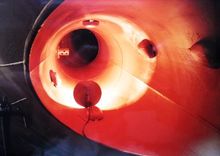 The roughly twice as high amount of cooling water from steam ships in relation to the propulsion power was the reason for using scoop capacitors on these ships first. During the R&D work and optimizations for the ship of the future (SdZ) in response to the second oil crisis, the engineers involved rated the advantage of saving electrical energy as high. Therefore, this principle was first introduced as a scoop cooler on a motor ship. The first completed ship of the future was the Norasia Samantha in 1985 , which was built as a container ship by Kieler Howaldtswerke-Deutsche Werft (HDW). In 1986, larger container ships followed at HDW, which contained many elements, including the scoop cooler.