This article explains the term game; for the mathematical fundamentals of hexagons and their grids, see hexagon . 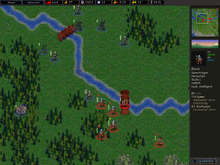 Example of a computer game with a hex grid card: Battle for Wesnoth

In games, a hexagonal grid or hexagonal grid is a game plan that consists of fields in the form of equilateral hexagons (hexagons). Colloquially it is often called a hex field , hex grid or hex plan , a single field for short hex .

Game boards based on hexagonal grids are often used in pen and paper role-playing games , conflict simulation games , and computer strategy games. Such a game plan was first found in 1961 in the second edition of the strategy game Gettysburg by the US manufacturer Avalon Hill . Other board games also have game boards with hexagonal fields (e.g. The Settlers of Catan , Hexagonal Chess, and Hex ), but the term is used less often here.

In board games and paper cards, the hexagonal grid usually consists of regular hexagons. In computer games in particular, however, there are also elongated, upright hexagons so that upright game figures are better represented.

Advantages and disadvantages compared to a square grid

The main advantage over a rectangular grid ("checkerboard pattern") is that it is easier in a hexagonal grid to count distances based on the fields. This is often important for moving characters or determining the range of ranged weapons. Counting the hex fields of the shortest route between any two fields always provides a fairly good approximation of the true distance. The maximum error is 15.5%, which can usually be accepted without any problems. In the case of square grids, two fields that are only touching at the corners have a distance between two directly adjacent fields. Simply counting the fields leads to an error of up to 41.4%. In a hex grid, a field only has neighboring fields that are connected to one another via edges, but none that are only connected to one another via corners. As a result, simpler rules for moving game pieces are usually also possible.

Example of a hexagonal grid with numbering of the individual fields

These advantages are essentially offset by two disadvantages. In some games it is necessary to indicate the coordinates of each playing field. With a square grid, this can be done simply and intuitively by specifying a “line” and a “column” (for example in chess notation ). Even with a hexagonal grid, specifying two coordinates is sufficient to describe a field. The assignment or the retrieval of a field is not that easy, however, because the two imaginary coordinate axes are either at an unusual angle of 60 ° to each other or the fields describe a serpentine line in one direction with the usual right-angled arrangement of the axes. The coordinates of a field are therefore often written directly into the field. (See also: Hexagon # Approximate Construction )

The second disadvantage is that the structures shown on the cards and game boards are often rectangular themselves. This applies, for example, to the representation of buildings, where the overlaying of a hexagonal grid inevitably cuts many fields. The rules must therefore also regulate the handling of such sub-fields. Some conflict simulation games (for example Cry Havoc ) try to get around this problem by adapting the floor plans of the buildings to the hexagonal grid. However, this usually leads to very unusual and fake-looking structures.