Spotted Elk, dead in the snow at Wounded Knee 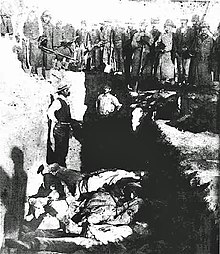 He got his English name Big Foot from an American soldier in Fort Bennett, who called him disparagingly "Si Tanka" ( Sit ȟ Anka 'Big Foot').

Spotted Elk's year of birth is controversial. His father was the Minneconjou Sioux chief Lone Horn (Lakotah: Heh-won-ge-chat) (circa 1790-1877). There are also contradicting statements about his place of birth. He had three brothers who all held senior positions in the tribe. Spotted Elk was a cousin of Crazy Horse and half-brother of Sitting Bull . He is described as a feared fighter, but also a diplomat who often settled disputes within the tribes, and was a signatory to the controversial Treaty of Fort Laramie in 1868 . After the death of his father, he took over his chief position.

Spotted Elk, along with Sitting Bull, Crazy Horse and others, inflicted a very heavy defeat on the 7th US Cavalry Regiment of the US Army at the Battle of Little Bighorn in 1876 . General George Custer and a large number of his men were killed in the process. But the US Army fought back mercilessly. After several defeats, Spotted Elk and his tribe had to surrender.

Spotted Elks tribe was reluctantly settled in the Cheyenne River Reservation in what is now South Dakota , USA . The chief tried to make the best of the situation. He instructed his tribe members to farm and tried to establish schools in the reservation area. For this he also went to Washington to win support for his projects.

The Indian spirit dance movement towards the end of the 19th century led to uncertainty among whites and many Indians. The movement split the Lakota into a group friendly towards the whites and a group hostile to them (spirit dance followers). Spotted Elk tried to mediate with his people, but the US Army saw them as a threat and pursued them. On December 29, 1890, the Wounded Knee massacre occurred. Si Tanka and up to 300 men, women and children of his tribe, as well as members of Sitting Bull's tribe, who had joined Spotted Elk after his death, were killed by the 7th US Cavalry Regiment, even though they were traveling with white flags and showed no warlike intentions. Spotted Elk was diagnosed with severe pneumonia at the time. His body lay frozen in the snow for days before he was buried in a mass grave.