Normally, a search team consists of a detector equipped with a dose rate meter and a marker equipped with boards and marker pens. The third man is the detection troop commander who monitors the entire operation and maintains the connection to the outside world (possibly with radio ). All members of the squad are also equipped with dosimeters .

The detection team can also have the task of measuring and marking a line with the same dose rate.

If the previously commanded warning thresholds are reached for the dose rate or for the absorbed dose , the entire team must leave the endangered area again.

There are detection teams at the police , rescue services , military , fire brigade and in disaster control .

In Austria there are search teams at the federal gendarmerie or the district authorities . 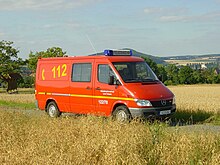 In disaster control in Germany, radiation detection vehicles are used for the detection team , which are a development of the state of Hesse for use in radiation protection and in particular in connection with the Biblis nuclear power plant . These vehicles are stationed in every district in Hesse and are manned by the districts' GABC measuring groups. The main task is to monitor the environment for radioactive contamination after an incident and to provide radiation protection . Although these equipment vehicles only have equipment for use in radiation protection in the country, this is usually supplemented by the GABC measuring groups with additional measuring devices and equipment for the use of dangerous goods.