The St. Petri Church in Stendal is a Protestant town church in the brick Gothic style . It belongs to the Stendal parish of the Evangelical Church in Central Germany and is located in the northwest corner of the old town of Stendal.

The Church of St. Petri is a three-aisled, four-bay hall church with a tower in place of the westernmost central nave and a two-bay choir with four sides of a decagon in the width of the central nave. The church was probably built in sections in the period after 1285, with the choir being completed in stone masonry in 1306. After that, in the first half of the 14th century, the nave and then the lower part of the tower were also built in field stone masonry. After completion of the tower, according to dendrochronological dating (d), the choir was raised and vaulted until 1371, the rood screen was installed and the nave vaulted. The later parts were made of brick masonry. The tower was raised to the level of the bell storey in 1415 (d). After that, the nave was vaulted in the first half of the 15th century. The spire was completed in 1583. As in the larger Jakobikirche in Stendal , octagonal pillars support the partition arches with stepped soffits and the cross vaults. On the outside of the choir there is a sandstone relief of the Annunciation , which was created around 1430. Restorations were carried out in 1933/34 and 1979/80. 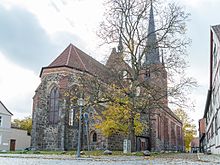 St. Petri from the northeast

St. Petri from the north with the cathedral in the background

The rood screen is designed as a half-height brick wall with two passages, with four-pass patterns made of shaped stones being arranged in the spandrels of the arches . The conclusion is a niche gallery with wooden sculptures of Christ blessing with twelve apostles from the mid-14th century. Above it, a triumphal cross from the middle of the 15th century closes the rood screen.

The altar consists of two carved altars placed one above the other on a two-tier predella . In the middle of the lower shrine a coronation of Mary is depicted, next to it and in the wings apostles and saints in two rows one above the other. The figures are of different origins and quality and date partly from the late 14th, partly from the late 15th century. A painted representation of the Calvary can be found on the wings. In the upper altar is a Madonna with six saints from around 1500.

The pulpit from around 1600 shows paintings on the parapet of the stairs and basket from a restoration in 1696, which show Salvator , Peter, the four evangelists and seven scenes from the New Testament and Luther as oil paintings on canvas in flat niches .

Further pieces of equipment are a brass chandelier from 1633, a Gothic cabinet with original fittings and a Gothic sacrament niche with an iron-studded wooden door. The sacristy door with fittings also dates from the Gothic period.

The organ is a work of the Voigt company from the beginning of the 20th century.

On the north wall there is a simple tombstone of Heinrich Christian von Hasfort († 1732). Further tombstones for Catharina Elisabeith Werckenthin († 1736), for Johannes Werckenthin († 1752) and Regina Sophia Döllen († 1759) with her husband Johann Friedrich Döllen († 1785) are attached to the tower pillars.

Of the two bronze bells from 1490 and 1497, one of which was cast by Geert van Wou and the other by Herman Vogel, the former deserves special mention as it was made by the founder of the most famous medieval bell, Gloriosa .