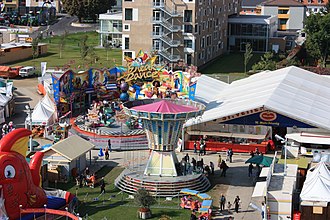 The St. Veiter Wiesenmarkt in 2008

The " Freyung " is set up 14 days in advance on the St. Veiter main square. The medieval legal monument is a symbol of market organization and market freedom.

The meadow market begins on the last Saturday in September with a parade through the city, which has around 1400 active participants. All cultural and traditional associations in the city and the surrounding area take part in the opening parade. Then the market regulations are read out by the " Herold ", the market opening is set up and the ten-day festival is officially opened by tapping the keg .

The Wiesenmarkt lasted 17 days until after the Second World War and was made up of three parts. It started with the " Vormarkt ", developed into the " Hauptmarkt " on the second weekend and ended on the third Monday with the so-called " Nachmarkt ". After the Second World War, the purchasing power of the population sank, the car was still a rarity, the train only ran during the day and so only a few visitors came to the Wies'n on the weekdays and especially in the evenings. Today the market starts on the last Saturday in September and lasts for 10 days.

While the market character has always been important over the centuries - thousands of horses and cattle often changed their owners - "the Wies'n" has mutated more and more into a folk festival with an entertaining character in the past few years and decades. Nevertheless, hundreds of fieries and barkers still dominate the action on the two weekends . On the Wiesenmarkt area there are grocer's, antique and flea markets, car and agricultural shows as well as a small animal show and economic exhibitions.

The dimensions using the example of the 655th Wiesenmarkt (2016): The amusement park consisted of 40 modern amusement devices and rides with a children's street. There were two large festival halls with dance, show and music performances and 24 Wiesenmarkt restaurants with traditional and international dishes as well as other stalls.

Since 2000, the “Schaubude” association has been trying to revive old structures on around 1700 square meters. The club has a stronger tradition: bowling is again on sand bowling alleys. The “Schaubude” association operates the Wiesenmarkt bowling alley. "Wiesenmarkt Highland Games" are organized, art and craft workshops are revitalized, a bakery is set up and puppet and fairy tale theater and a petting zoo for children are offered.

The festival is also of great economic importance for the city: During the festival, up to 300,000 visitors from Carinthia, the neighboring federal states, but also from the neighboring states of Slovenia and Italy are counted, and a total annual turnover of up to 20 million euros is achieved. In addition to an amusement park, which is obligatory for folk festivals, music groups as well as dance and show programs provide entertainment in which Udo Jürgens or the Roletts (dubbed the Carinthian Beatles ) celebrated their first successes at the time.

More than 10,000 spectators - more than ever before - lined the streets of the city in 2016 for the large parade with 2000 participants on the occasion of the opening of the 655th Wiesenmarkt.