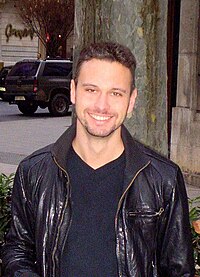 Stefan Aretz attended secondary school in Lohmar and graduated from high school in Allee Straße. He did his community service in a Protestant retirement home. During his school days, Aretz wrote and staged his own plays in which he participated as an actor. Since he was eight he received acting lessons in the children's and youth theater on the Baacher stage.

Aretz is on the theater stage while shooting for film and television productions. He played in the plays Germany's Next Top Model (2008) and Stowaway (2009). In the play Mobil (2008), Aretz played a leading role alongside Verena Plangger . Aretz played “Bassanio” in the Merchant of Venice (2009) directed by Burkard Schmiester.

Since 2009 Aretz has been developing material for cinema and feature film productions as a screenwriter. He wrote the scripts for the short films Wischmopp (2011) and Pärchenabend (2011) and for the feature film Sorry Guys (2017), which he also directed.

Filmography as an actor