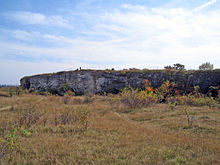 Stránská skála is a national natural monument on the outskirts of Brno in the Czech Republic . It was proclaimed in 1978 and consists of a 16.6-hectare freestanding rocks of Jura - Limestone . The area is known internationally as a paleontological and archaeological site. In terms of fossil finds, rock-forming marine life as well as large mammals and cave dwellers of the Quaternary are of scientific interest. Traces of Homo erectus settlement more than 500,000 years old were found in one of the 29 or so caves , and a flourishing stone industry developed here in the Upper Paleolithic .

In the present, the rock provides a habitat for many animals and plants. 429 taxa of higher plants were counted here, 50 of them are on the red list of endangered species .